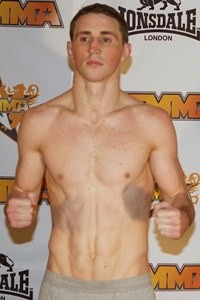 Mixed Martial Arts has had its share of underdogs over the years, proving their doubters wrong when the spotlight shines brightest and in some cases, reach the goal that every fighter dreams about, becoming champion. In today’s episode of Across The Pond, you will meet a fighter who will seek to capture the BAMMA Featherweight championship from a fighter nobody seems able to figure out. Fighting out of All Powers Gym, Brendan Loughanne holds a 10-1 record consisting of four Knockouts, four decisions, and two Submissions. Brendan made his professional debut in June 2010, defeating Jordan Desborough via Knockout in the second round. He would go on to defeat Shawn Law and Danny Welsh before signing to the UFC as an alternate for TUF Smashes, losing to eventual Lightweight winner Norman Parke in the Semi-finals. Brendan was given a second chance to compete for a UFC contact when he made his official UFC debut at UFC on FX 6 in Australia. losing to Mike Wilkinson  via Unanimous Decision. He then signed with Full Contact Contender in September 2013, defeating Tim Close and Ali Maclean before signing with BAMMA in late 2014. In his debut fight for BAMMA, Brendan faced Frenchman Florian Rousseau at BAMMA 17 and defeated him via Knockout late in the first round. For his next fight for the promotion, he faced another Frenchman, Steve Polifonte at BAMMA 19, besting him via Unanimous Decision. He will now face ”Firekid” for the BAMMA Featherweight title in the main event of BAMMA 22. You can catch Brendan and Shay Walsh on the 20th installment of the Throwdown podcast featuring Bryan Lacey.