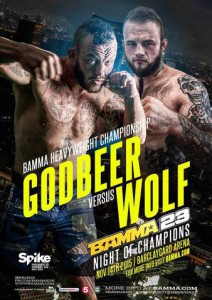 BAMMA 23: Night Of Champions Announced
BAMMA is brought to you in Association with:

BAMMA, leaders in MMA sports entertainment and the home of European MMA, is excited to announce BAMMA 23: Night Of Champions will take place on Saturday 14th November 2015 at the Barclaycard Arena, Birmingham. With multiple titles on the line, BAMMA 23 is set to be one of biggest Mixed Martial Arts events of the year.

It’s England Vs. Germany in the BAMMA 23 Main Event, as Mark Godbeer makes his first defence of the Heavyweight Title against the recently signed Ruben Wolf. Bantamweight Ed Arthur also makes the first defence of his coveted Bantamweight crown against challenger Shay Walsh, and it’s Germany Vs. England once more for the Flyweight Title as Champion Rany Saadeh defends against hometown hero Chris ‘Nightmare’ Miah.

The first bouts to be announced for the event are:

The most anticipated UK Heavyweight bout of the year is finally on! After both fighters went to war over social media and the fans demanded that it happen, the bout has been signed for the BAMMA main event at BAMMA 23: Night Of Champions. It will be the age old rivalry of England vs. Germany as two of Europe’s top Heavyweights collide for the BAMMA Title.

Mark ‘The Hand Of’ Godbeer (10-2) reached the top of the mountain at BAMMA 21, and had his hand raised in victory over Paul ‘The Titan’ Taylor to become the first ever holder of the BAMMA Heavyweight Title. The ‘All or Nothing’ fighter became a overnight sensation with the win and now returns to face the man who has been calling him out ever since. The ‘Bridgewater Bomber’ will be looking to not only defend the title but to make a statement for all future challengers.

“Really looking forward to fighting Ruben at BAMMA 23. The UK’s best Vs Germany’s best. It really is one for the fans. There’s no way hes taking my belt. This is my house. And thats where its staying. UK Vs Germany lets do it!”

Ruben ‘The Viking’ Wolf (10-6) will finally make his eagerly anticipated BAMMA debut and gets thrown in right at the deep end as he gets his chance to take the BAMMA Heavyweight Crown against Godbeer. The fighter from Rosenhiem, Bavaria is coming off a big win against James ‘The Juggernaut’ Mulheron back in February of this year. Blitzing him in just 36 seconds of the third round, Wolf sent out a warning to Godbeer that he is coming for the belt.

“Finally the fight that not only I wanted, but everyone wants to see is happening. There is nothing that can stop me now from winning and becoming the best Heavyweight in Europe. Godbeer’s fans better be prepared to go home disappointed on November 14th”

Since being crowned as the BAMMA Bantamweight Champion at BAMMA 20, Ed Arthur (6-0) has had no end of challengers and call outs. The Hemel Martial Arts Standout has made no bones about his willingness to take on all comers, and now faces the exceptionally dangerous Walsh. The undefeated Arthur has had nothing short of a meteoric rise in MMA and intends to continue on that journey at BAMMA 23.

“I will beat all these bantamweights, no one is taking my belt!”

Shay Walsh (13-3) put on a dominant display at BAMMA 21 in beating the previously undefeated Gaz ‘Spitfire’ Pilot in his Bantamweight debut to secure the first shot at Ed Arthur’s title. The fighter who splits his time between Lancaster MMA & Tiger Muay Thai in Phuket under Roger ‘El Matador’ Huerta, will present Arthur with his biggest challenge yet. Walsh is determined that he will walk away the Champion on the 14th November and that he will do everything in his power to make it happen. Get ready for fireworks, in what will be a fight that simply cannot be missed.

“I’m looking forward to this one, we both bring a big crowd so I think the noise will be deafening. I’ll be bringing a world title back to Lancaster”

In another England Vs. Germany matchup on the BAMMA 23 fight card, BAMMA Flyweight Champion Rany Saadeh (7-1) will look to defend his title for the first time in a rematching of the bout that was originally scheduled for BAMMA 20 before Saadeh’s withdrawal. Now fully recovered (and in between crime fighting in his home in Berlin), Saadeh is fully prepared for the upcoming challenge of Miah in November. Currently riding a four fight win streak, he will look to continue that and end Miah’s rise in the Flyweight ranks.

Chris ‘Nightmare’ Miah (7-0) will finally get his chance at the BAMMA Flyweight Title after having the previous bout cancelled at BAMMA 20. Taking on replacement Daniel Barez he ended the bout in dominant fashion as he secured the match winning rear naked choke in just 1:46 of the second round to keep his unblemished record intact. Miah has sights set on the BAMMA Flyweight Title and dominating the division for some time to come.

“Finally I get my chance to bring home the BAMMA gold after Rany unfortunately was unable to compete earlier this year. However it enabled me to stay active and I’m more than ready to dominate en route to the BAMMA title”

Tickets on sale FRIDAY 21st August at 10am

SideKick: A day in the life of an equipment manufacturer