Over the years, there have been many fighters from England,such as Phil Harris to Danny Mitchell,that have made it to the UFC . In today’s episode of Across The Pond, you will meet the ne 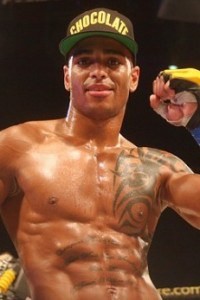 xt star from England who will be looking to make a name for himself in the big show. A Professional since December 201o and fighting out of The Blackzilians with UFC veterans Rashad Evans and Anthony Johnson, Danny ” Hot Chocolate” Roberts  owns a 11-1 record in record in 12 career fights consisting of five Knockouts, four Submissions, and two decisions. Roberts has a great ground game to go along with his improved striking ability.He defeated his first three opponents by knockout, which included a second round knockout of David Howell in his Cage Warriors 43 debut  in 2011. Roberts returned to the promotion to face English MMA veteran Jack Mason at Cage Warriors 48 in London and defeated him via armbar in the second round. In his next fight for the promotion, Roberts took on Sweden’s Diego Gonzalez at Cage Warriors 54 in Cardiff,Wales and defeated him via knockout in the second round. At Cage Warriors 57 in Liverpool, he defeated Ireland’s Henry Fadipe in the third round. Roberts followed that up with a back and forth war with Spain’s Juan Manuel Suarez at Cage Warriors 64 and knocked out BAMMA veteran Jim Wallhead in the main event of Cage Warriors 68 . Roberts will now face TUF 21 fighter Nathan Coy at UFN 80 on December 10, 2015 replacing the injured Micheal Graves for his official UFC debut.