One of the most important aspects to being a fighter is the ability to get yourself out of tough spots and proving you have the grit to handle whatever the sport throws at you. In today’s episode 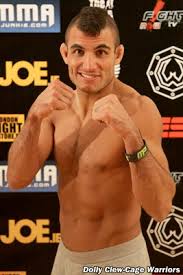 of Across The Pond,you will meet a fighter who is a total beast when the cage door shuts. A professional since July 2011 and fighting out of Iron Mann MMA with Cage Warriors veteran Ronnie Mann, Nad Narimani owns a 7-2 record in 9 career fights consisting of four submissions, two decisions and one knockout. Nad is a very durable fighter who can not only take punishment, but can also dish it out as well. In his MMA debut, he defeated Harvey Dines via corner stoppage late in the second round. He won his next 4 fights before signing with Cage Warriors in 2013. At Cage Warriors 60 in London, he defeated Theo Michalids via rear naked choke in the first round. Nad returned to the promotion to face Benjamin Brander at Cage Warriors 64 and defeated him via submission in the first round. In 2015, Nad signed with BAMMA and will now face Jermey Petley at BAMMA 23 on November 14, 2o15. Best of luck Nad!

Rising Through The Ranks