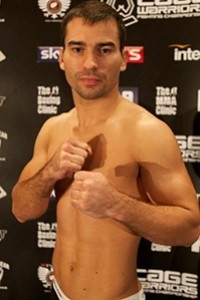 e the odds despite doubts from critics.  In today’s episode of Across The Pond, you will meet a fighter who is looking to cap off his remarkable run on the latest season of The Ultimate Fighter. A professional since November 2010 and fighting out of SBG Ireland alongside ”Notorious”, Artem Lobov owns an 11-10
record in 21 career fights consisting of four knockouts, two submissions, and five decisions. Artem is known for his perseverance and is always game no matter who the opponent is. A lot of the SBG
Ireland fighters are known for their knockout power and Artem is no exception. Lobov is best known for having fought for Cage Warriors. At Cage Warriors 41 in London, Artem defeated submission artist David Hill via unanimous decision. He followed up that performance with a decision win over Kamil Korycki at Cage Warriors 46 in Ukraine in 2012. In 2013, Lobov scored wins over Andy Green and Martin Svensson. At Cage Warriors 70 in Dublin, he faced Andrew Fisher and defeated him via knockout with one second remaining in the third round. In 2015, Artem was selected to be part of Team Europe at 155 pounds. In episode two of The Ultimate Fighter 22, he was brought back by Connor.   For episode eight, he faced Team Faber’s James Jenkins and defeated him via knockout in the first round. In the quarterfinals, he faced ”Gritz” of Team Faber and defeated him via knockout in the second round. For the Semis, Lobov will face  the last remaining member of Team Faber, Julian Erosa this Wednesday. Good luck Artem!