For The first time since 2014, the UFC will look to add some more Strawweight tal 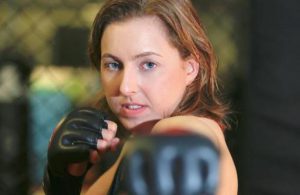 ent to the division. In today’s episode of Across The Pond, you will meet a fighter who is looking to make Europe proud. A professional since May 2009 and representing Koncept Gym, Kate Jackson owns a 7-2-1 record in 9 career bouts consisting of three knockouts, three decisions and one submission.

In her MMA debut, Jackson knocked out Kate Rennie in the first round in just 48 seconds. Then, she picked up a decision win over Fay Ridgeway. In 2012, Jackson scored back to back wins, knocking out Paula Ralph in just 24 seconds and picking up a decision over Chloe Hinchcliffe respectively. At Cage Warriors 72 in 2014, Jackson faced Paulina Bonkowska and knocked her out in the first round. She went 2-0 in 2015, submitting Eeva Siskonen in round three and earning a decision over Linn Wennergren respectively. Kate will be one of 16 Strawweight hopefuls hoping to make into the TUF house when the new season kicks off on April 20th on Fox Sports 1. Good luck Kate!

Queen Of The Rockies