Mixed Martial Arts is a sport that requires you to face challenges head on. In today’s e 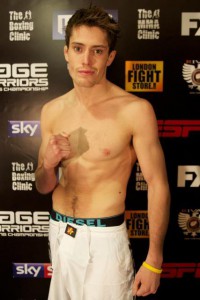 pisode of Across The Pond, you will meet a fighter who elevates his game with each new challenge that comes his way. A professional since April 2008 and representing Fearless MMA, Dave Hill owns a 12-4 record in sixteen career bouts consisting of nine submissions and three decisions. Dave is best known for his time in Cage Warriors.

In his MMA debut, Dave submitted John Street in the first round. He also tapped out Ross Mould via triangle choke in round one before picking up a decision win over Dan Hope.  Dave won his next six fights which included wins over Chris Thomson and Ashleigh Grimshaw respectively. He earned a submission win over English MMA veteran David Lee via triangle choke in the first round. Dave returned to Cage Warriors in 2013 to face Brian Moore at Cage Warriors 59 in Wales. He defeated Moore via unanimous decision. At Cage Warriors Fight Night 10, Hill faced Spanish fighter Miguel Haro and submitted him in the second round. One thing is for certain, no matter what the challenge is, this fearless fighter always brings his A game!