by Myles Painter
in Across The Pond, UK MMA News
6 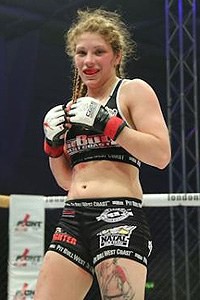 ton to Anna Elmose. In today’s episode of Across The Pond, you will meet a rising European star hoping to follow in the footsteps of UFC Straweight champion Joanna Jedrzejczyk. A professional since October 2012 and representing Grappling Krakow, 21 year old Agnieszka Niedzwiedz owns a 8-0 record consisting of four knockouts, two submissions and two decisions. She is best known for her in Cage Warriors from 2013-2014.

In her MMA debut, she defeated Agnieszka Sobczyk via TKO in the first round. She also defeated Joanna Ogrodnik and Klaudia Apenit via knockout in round two respectively.Then she submitted Iren Racz via armbar in round one. At Cage Warriors 62, she defeated Kerry Hughes via unanimous decision. She also submitted Gemma Hewitt via triangle choke in the first round at Cage Warriors 67. Then she knocked out Julija Stoliarenko in round three. In 2016, she faced late replacement Christine Stanley at Invicta FC 18 and defeated her via unanimous decision. This Polish powerhouse is poised for a UFC contract in the future!