The extra rush of adrenaline a local fighter can get from fighting in their hometown in front of family and friends is nothing short of priceless.  In today’s episode of Across The Pond, you will meet a smart, tactical fighter who is set to make her UFC debut at The TU 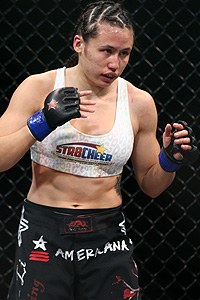 F 24 finale on December 3. A professional since November 2014 and representing Syndicate MMA under John Wood, 27 year old Jamie Moyle owns a 3-1 record in four career bouts consisting of two decisions and one submission.

In her MMA debut at Invicta FC 9, Jamie defeated Jenny Liou via unanimous decision. Then she submitted JJ Aldrich via rear naked choke in the first round at Invicta FC 11. At Invicta FC 13, Moyle defeated Amy Caldwell Montenegro via split decision. In 2016 Jamie was selected to be a part of TUF 23. To get into the house, she submitted Alyssa Krahn via rear naked choke in round one and was the second female selection of team Joanna. Moyle will now face Kailin Curran at The TUF 24 finale on December 3. Good luck Jamie!