Who should GSP fight when he returns to the UFC?

After a very public contract dispute George St-Pierre and the UFC have managed to come to terms with the Montreal native expected to return to the octagon later this year. With Conor McGregor apparently unavailable for at least the first half of the year and Ronda Rousey looking increasingly unlikely to return the re-signing of the former welterweight champion brings some much needed star power to the UFC’s PPV business in 2017.

Now that monetary issues are out of the way attention turns to who GSP should face in his return  bout. With a myriad of factors to consider for GSP, the UFC, and the sport, let’s take a look at who could welcome one of the greatest of all time back to action. 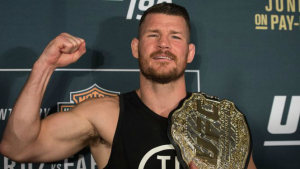 There has been a lot of chatter around a possible match between the middleweight champion Michael Bisping and GSP in recent days. Firas Zahabi, GSP’s coach at Tristar, is reported to favour this match up. Although Bisping would have a considerable size and reach advantage it would be interesting to see how his volume style would hold up against the aggressive wrestling of St-Pierre. This match would be sure to do well at the box office with both fighters being well know in the North American market. However, with Yoel Romero and Ronaldo “Jacare” Souza waiting in the wings for a title shot, this match seems to be more about the build up than sporting merit. 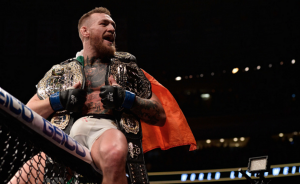 While the status of a potential fight between McGregor and boxing legend Floyd Mayweather seems uncertain at best the Irish Lightweight champ has suggested he could return as early as the third quarter of 2017. Exactly when GSP is set to return. This fight is easily the best option for both fighters and the UFC in terms of PPV buys. However there is a danger of diminishing the PPV potential of the losing fighter. It would make more business sense, at least in the long term, to keep this fight for a later date. Stylistically this exciting match would see McGregor trying to retain range to work his Tae Kwon Do and boxing against GSP’s continual takedown attempts. 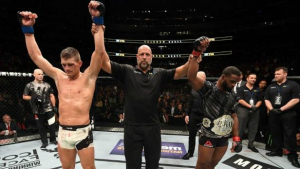 3. Winner of  Woodley vs Wonderboy

Whoever wins the highly anticipated welterweight title rematch between Tyron Woodley and Stephen “Wonderboy” Thompson at UFC 209, the reward of a fight with one of the greatest of all time would be highly deserved. Woodley vs GSP would see two fighters with similar skillsets but different focuses go up against each other. Pitting Woodley’s powerful right hand and traditional freestyle wrestling against GSP’s distance controlling jab and smothering MMA wrestling. Whereas Wonderboy vs GSP would be a classic striker vs grappler match up. As St-Pierre never lost the welterweight title it would be hard to deny him an immediate title shot. However, this would mean making Demian Maia wait even longer for his long overdue title fight. It may also be expecting a lot to pit a fighter who has been out for nearly four years against two fighters at the peak of their careers. 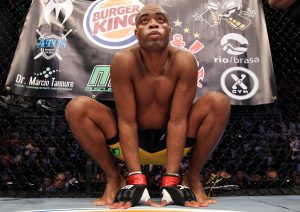 After close fights with Michael Bisping and Derek Brunson, and a lacklustre performance against Daniel Cormier, Anderson Silva’s career seems to be lacking a clear path forward. There was a lot of talk some years ago of pitting two of the most deserving contenders for the title of greatest of all time against each other but the fight never materialised. While this fight would generate a lot of hype it could end up like the highly anticipated bout between Mayweather and Pacquiao: interesting but unfortunately made five years too late. 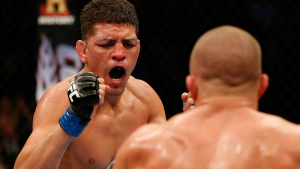 The older Diaz brother who hasn’t fought since early 2015 in a no contest bout against Anderson Silva is still one of MMA’s biggest stars. His no BS attitude and previous rivalry with GSP would ensure an entertaining build up to fight night and high returns at the box office. The chance to see Diaz’s unorthodox yet brutal boxing style, slick submission skills and in cage antics against GSP’s efficient wrestling focused game would make for an interesting rematch for hardcore and casual fans alike. This matchup also seems fairer than some of the other potential bouts as both fighters have been inactive for a long time. While also leaving open the possibility of the other matches discussed in this article. A GSP vs Diaz rematch makes a lot of sense in terms of business, sport and entertainment.

Who would you like to see GSP face off against in his highly anticipated return?

Lets us know in the comments below.