by Lewis Smith
in MMA News
38

Boxing star, Amir Khan, has revealed he is interested in making a switch to MMA in the future, and would love to test his skills against UFC’s lightweight Champion, Conor McGregor.

The Bolton boxer, Khan, hasn’t stepped into the ring since last May – after suffering a brutal knock out to Canelo Alvarez- and has yet to announce when his return will be. While Conor McGregor is one of the most lethal fighters in the UFC, Khan is confident he could give the brash Irishman a run for his money.

“I always said I’d give it a go, I’m a fighter who likes to fight and try different things,” Khan told ESNEWS. 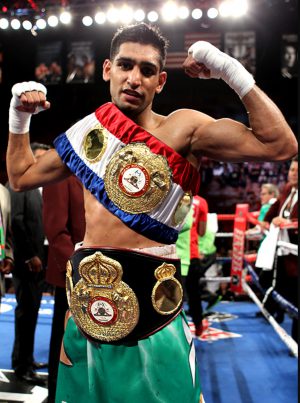 The comments came as Khan discussed McGregor’s chances in a crossover match with mega star, Floyd Mayweather. Though that match would almost certainly take place in the boxing ring, Khan would face McGregor in the ring or the Cage if the offer was right.

“Nate [Diaz] choked him out and Nate said to me ‘he’s not the best when you get him on the floor’, so he’s normally a stand up fighter.”

“In boxing I think I beat him quite easily, but in MMA I think it might be tough, but you just don’t know.”

Into The World: A MMA Fans Memoir - The autobiography of Myles Painter