by Myles Painter
in Across The Pond, UFC
35

On April 8, the UFC will return to New York with a card featuring some up and coming 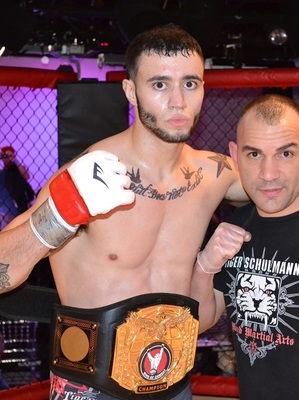 talent from the eastern United States. In today’s episode of Across The Pond, you will meet a hard charging, bull-like fighter looking to maintain his undefeated record at UFC 210. A professional since July 2013 and representing Tiger Schulmann’s Mixed Martial Arts, 26-year-old Shane Burgos owns a 8-0 record consisting of four submissions, three knockouts and one decision.

In his MMA debut, Shane submitted Ratioender Melo via rear naked choke in the first round. Then he defeated Ashure Elbanna via TKO in round one. Shane submitted Myron Baker via rear naked choke in round two. He also submitted Bill Algeo and Donald Ooton respectively. At CFFC 45, Shane defeated Tyrell Hobbs via TKO in the first round. He followed that up with a knockout of Jacob Bohn at CFFC 56. In his UFC debut at UFN 102 in Albany, New York, Shane faced Tiago Trator and defeated him via unanimous decision. Burgos will tangle with Charles Rosa in a potential fight of the night candidate on April 8 at UFC 210 in Buffalo. Good luck Shane!