by Myles Painter
in Across The Pond, Cage Warriors
2

Northern Ireland’s MMA scene has gained steam over the years with notable stars like UFC veteran Norman Parke leading the charge. In today’s episode of Across The Pond, you will meet a versatile fighter looking to add his name to that illustrious list and test his metal at Cage Warriors 83 on May 6. A professional since May 2011 and representing Team Evolve and Ryano Derry, Gavin Kelly owns a 7-3 record in ten career bouts consisting of three submissions, two knockouts and two decisions. 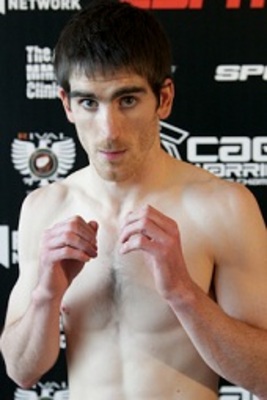 In his MMA debut, Gavin defeated Anthony McGarth via TKO. Then he submitted Mike McAteer via armbar in the first round. At Cage Warriors 63 in Dublin, Gavin defeated Dylan Sheehan via unanimous decision. Gavin submitted Patrick Blight in the first round at CFC 13. Then, he knocked out Luke O’ Neil in round one. Gavin earned a split decision victory over Neil Ward at CFC 15. In the main event of Clan Wars 24, he submitted Steve McCombe in the third round to become the Clan Wars Bantamweight champion. At Cage Warriors 83 on May 6, Gavin will head into hostile territory to take on the unbeaten Josh Reed (6-0) in an intriguing Bantamweight clash. Good luck Gavin!

Interview with Gavin done by Mick Kane of MMA UK

It’s been nearly a year since you last fought, has there been a reason for the lay off?

Will be over a year since I last fought but not by choice I had fights scheduled for June, November and December but had pull outs plus thumb surgery which kept me out for 3 months.

You are the current CHAOS and Clan Wars bantamweight champ as well as NI Freestyle wrestling champ 66kg and ISKA kickboxing champ 75kg. Do these achievements make you hungry for more success? Do they give you confidence to claim the Cage Warriors title?

I am always hungry for more success which is why I have signed with Cage Warriors. I have been successful in Ireland in MMA, wrestling and kickboxing but feel the time is right to prove myself in the UK and Europe and no better way than become Cage Warriors bantamweight work champion but one step at a time starting with CW 83.

You are scheduled to fight At CW83 against popular Welshman Josh ‘ Crazy Horse ‘ Reed, how difficult will it be fighting in his backyard? Do you know much about him? What do you expect from him?

The Welsh and Irish are very similar so he will have great support but all the pressure is on Josh and I’m gonna do my best to spoil the party. I know he is undefeated and having watched his last fight on Cage Warriors he looks comfortable everywhere and seems like a cool dude so I expect a tough fun fight wherever it goes.
You come from a GAA background, having played for Ballinascreen, do you find there is a crossover in training between the two sports? Do you still manage to play GAA?
To be honest, I regret the years I wasted playing GAA but only discovered MMA when I was 22/23 when I was at university, so was a late comer to the sport and only wish I had discovered it earlier but no the training doesn’t compare and I don’t play anymore.
You split your time between a couple of gyms in Ireland and also spent sometime in Liverpool. Does the travelling take its toll? Do you find it beneficial?
Training in Liverpool under Paul Rimmer was great and gave me the confidence to turn pro. I learnt so much in 3 great years there, but have been home now for 2-3 years training at Team Evolve/Ryano Derry with the odd trip back over to Liverpool and down to Team Ryano headquarters in Dublin. I also spent sometime with Rodney Moore in Ballymena when I got home from Liverpool and it’s all been beneficial with each gym and coach helping me become the fighter I am today. Yeah the travelling took its toll as I hate driving.
You have spoken in the past about how churning vegan has helped with weight cutting? What’s your thoughts on drastic weight cutting? Do you feel fighters should compete closer to their walk around weight?
Turning vegan has definitely helped my weight cuts as it cleans up your diet and has brought my walk around weight down about 10 pounds. I also have a great S&C coach in John McMahon at J Max Fitness which helps massively as well as being an Eat Naked NI Sponsored Athlete who provide me with real healthy vegan friendly meals. But yeah, I don’t agree with massive weight cuts and feel fighters should definitely compete closer to their walk around weight for their own safety and longevity within the sport.
In recent years Irish MMA has had a few high profile fighters, how so you think the Irish MMA scene stands at the moment?
I think Irish MMA is in a good place right now which is evident with the UFC, Cage Warriors, Bellator and BAMMA all having had shows in Ireland recently.
What’s your ambitions within the sport?
My ambition was to sign for Cage Warriors and now that’s done, it’s to get the victory in Wales and go after that bantamweight world title.
Tags: Cage WarriorsCage Warriors 83Gavin Kelly