by Myles Painter
in Across The Pond
38

No matter how much experience a fighter has, there is always room for growth and impro 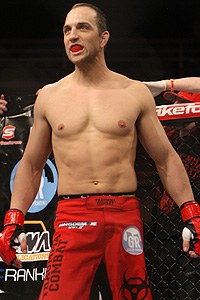 vement in Mixed Martial Arts. In today’s episode of Across The Pond, you will meet a savvy veteran whose crafty, punishing style has him in prime position in the UFC‘S Middleweight ranks. A professional since January 2009 and representing AZ Combat Sports, Trevor Smith owns a 15-7 record in 22 career bouts consisting of nine submissions, five decisions and one knockout.

In his MMA debut, Trevor knocked out Brian Martin in the first round. Then he defeated his next three opponents via submission which included victories over Matt Kovacs and Tim Perales respectively. Trevor submitted Pete Werve via rear naked choke in round one. He also tapped out Wes Swofford and Jared Torgeson respectively. At Strikeforce Challengers 16, he submitted Keith Berry via north-south choke in the second round followed by a round one submission victory over TJ Cook. Trevor submitted Alexandre Moreno in the first round via guillotine choke. At UFN 35, he defeated Brian Houston via split decision followed by a unanimous decision victory over TUF 17 alumni Tor Troeng at UFN 46 in Dublin, Ireland. At The Ultimate Fighter 21 finale, Trevor defeated Dan Miller via unanimous decision. He also defeated Joe Gigliotti via unanimous decision at UFN 92. At UFN 109 in Stockholm, Sweden, he defeated Chris Camozzi via unanimous decision. ”Hot Sauce” is looking to add some spice at 185 pounds!