by Myles Painter
in Across The Pond, UFC
27

Season 20 of The Ultimate Fighter saw the introduction of the UFC Straweight division. In Today’s episode of Across The Pond, you will meet one of the cast members from that seas 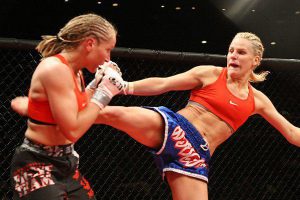 on who will be aiming for her third straight octagon victory when the UFC returns to Oklahoma on June 25. A professional since December 2010 and representing Black House MMA, 29 year old Justine Kish owns a 6-0 record consisting of four decisions and two submissions.

Interview with Justine with assistance from Mick Kane of MMA UK-

You were set to appear at TUF a few years back but injury ruled you out, did you think your chances of appearing in the UFC were over?

I am a competitor by nature so naturally I wanted be there and to win and could not. Having said that, losing my UFC career never entered my mind specifically. I was (and am) appreciative of the opportunity the UFC has given me and did not want to disappointment fans either. I don’t spend any time dwelling on my knee or perhaps what could have been either. After a brilliant surgery and rehab, I don’t feel as if I could be in a better place physically.

You made your debut in UFC 195 in Jan 2016 with a win against Nina Ansaroff, what was that feeling like to win on your debut and finally making debut after the injury?

I don’t want to sound negative but I did not perform well and felt poorly about it. Nina was tough and that was awesome, but I just did not display the tools I worked so hard to develop. Again, a lot like the the former question, the (Uber) Competitor often takes over and I have a difficult time ever being satisfied.

You last fought in December, another win to take your record to 6-0 (2-0) in the UFC, are you starting to feel more comfortable in the UFC environment?

Again, at the risk of sounding repetitive, I just love to compete. The entire process, really. The UFC is the summit for MMA Athletes and I am thrilled to be here. The UFC is constantly bolstering the roster and taking the very best prospects. It seems more competitive by the day and I would not have it any other way.

Have you noticed a step up in the quality of fighters since fighting in the UFC?

Much like the other questions, my level of comfort is great irrespective of where I compete.

You are from a Muay Thai background, having won the WMC Muay Thai world championship in 2012, do you feel this was good preparation for competing in MMA?

My Muay Thai background is a good building block for MMA. The physical tools in Muay Thai are amazing and I continue to work on them daily while adding MMA sensibilities. Also,  Muay Thai allowed me to travel and to compete and gave me so much great scaffolding to build upon.

As predominately a striker, have you had to work hard on your submission skills?

You can no longer afford to be one thing or the other: I have been grappling for years, truth be told. I suppose I have a higher degree of recognizability for the Muay Thai laurels ,but am no more a striker than I am grappler at this point.

You are due to meet Felice Herrig on June 25 in Oklahoma City.
She is just off a good win against Alexa Grasso, what are you expecting from her when you fight her?

Felice’s accomplishments speak for it’s self. She is a super stiff test for me and I (as you might expect) cannot wait to compete against her in OKC.

After your next fight, if victorious, who would you want next? Are you looking to move up the ranks?

I have had 2 UFC fights so I am hardly in a position to call my shots. Of course I want to compete against the absolute best.

How close do you feel you would be to a title shot after beating Herrig?

Whether I am “close” or not will be up to the UFC: They do an excellent job of match making and I fully believe in their process. I will relentlessly pursue the Championship and for now, that is the best I can do.