by Myles Painter
in Across The Pond, UFC
30

Regardless of what sport you are in, everyone must pour their heart and soul into it in order to achieve their respective dreams. In today’s episode of Across The Pond, you will meet a tough scrapper looking to use her explosive knockout power at The Ultimate Fighter  25 Finale on July 7 live on Fox Sports 1. A professional since April 2014 and representing Alliance MMA, Angela Hill owns a 6-3 record in nine career bouts consisting of three knockouts and three decisions. Angela is best known for her time on The Ultimate Fighter season 20 and for her time in the premier Women’s MMA promotion, Invicta Fighting Championships. 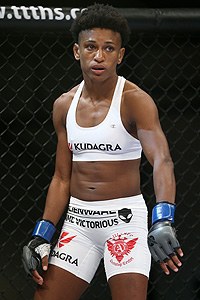 In her MMA debut, Angela defeated Stephanie Skinner via TKO in the second round. In 2014 she was selected to be a part of The Ultimate Fighter 20 cast. At the show’s finale, Angela faced Emily Kagan and defeated her via unanimous decision. She knocked out Alida Gray in the first round at Invicta FC 15. Hill also knocked out Stephanie Eggink in the second round at Invicta FC 16. Then at Invicta FC 17, Angela defeated Livia Renata Souza via split decision and became Invicta FC’S Straweight champion in the process. She also defeated Kaline Medeiros via unanimous decision at Invicta FC 20 thereby earning a return trip to the UFC in the process.  At The Ultimate Fighter 25 Finale on July 7, Angela will square off with Ashley Yoder in a explosive Straweight contest live on Fox Sports 1. Good luck Angela!