by Lewis Smith
in UFC
30

It’s been the most highly anticipated match up in recent history, with a raucous world tour that at times threatened to spill over. Though now, after both fighters made weight last night, at the T-mobile arena Las Vegas, Mayweather McGregor is finally good to go.

“He looks blown out, full of water,” said the 29 year old McGregor, after the pair had met in a heated final face off at the weigh ins.

The confident Irishman, who had just moments earlier screamed in the face of his opponent, went on, “That’s the worst shape I’ve ever seen him in. I am going to breeze through him, trust me.” 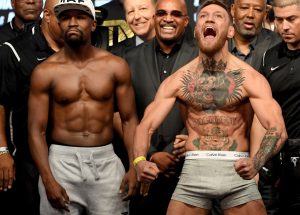 McGregor stepped on the scales at a ready 153 lbs ahead of Saturday’s 154 lbs match up. Mayweather however weighed in lighter again at a lean 149.4 lbs. 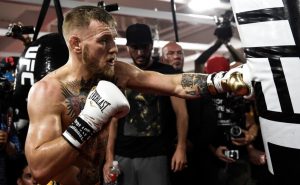 Both fighters appear to be supremely confident leading in to the match up- with UFC lightweight champion Conor McGregor, looking to cause the biggest upset in sporting history, in his boxing debut. Mayweather will look to make history of his own taking his perfect (49-0) record to (50-0) overtaking the record of legendary boxer Rocky Marciano.

The fighters are expected to step into the ring no earlier than 4am BST.