by Myles Painter
in Across The Pond, UFC
33

New Jersey is well known for producing tough scrappers like Dan Miller and many other eastern products. In today’s episode of Across The Pond, you will meet a fighter whose ruthless mentality hopes to carry him to victory at UFN 120 on November 11. A professional since June 2015 and representing Killer B Combat Sports Academy, 26 year old Karl Roberson owns a 5-0 record consisting of two knockouts, two submissions and one decision. Karl has fought for various MMA promotions in the the Northeastern United States including Cage Fury Fighting Championships and Ring of Combat. 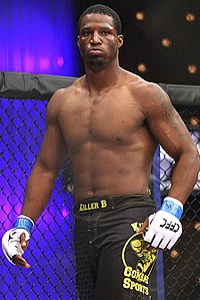 In his MMA debut at Ring of Combat 51, Karl defeated Chike Obi via unanimous decision. Then he submitted Michael Wilcox via armbar in the first round at Cage Fury Fighting Championships 50. Karl defeated Elijah Gbollie via TKO in round one. At Cage Fury Fighting Championships 65, he submitted Derrick Brown via armbar in the first round. In the main event of Dana White’s Tuesday Night Contender Series 3 Karl knocked out Ryan Spann in the first round and earned his ticket to the UFC in the process. At UFN 120 on November 11, Karl will face England’s Darren Stewart in an international Light Heavyweight affair. Good luck Karl!