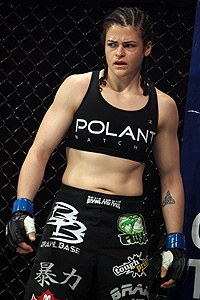 Under the leadership of Scott Coker, Bellator MMA has experienced a rebirth with many fighters revitalizing their careers. In today’s episode of Across The Pond, you will meet a bludgeoning pacific pounder looking to crash the party in Bellator MMA’S Women’s Featherweight division. A professional since January 2013 and representing Animals MMA,  29 year old Amanda Bell owns a 5-5 record in ten career bouts consisting of three knockouts, one submission and one decision. Amanda is also a Invicta Fighting Championships veteran.

At SCL Army versus Marines 5, Amanda submitted Brittney Elkin via rear naked choke in the second round. Then she knocked out Marina Shafir in the first round. At Invicta FC 9, Amanda defeated Maria Hougaard Djursaa via TKO in the first round. She defeated Gabrielle Holloway via unanimous decision at KOTC Heavy Trauma. At Bellator 181, Amanda defeated Brittney Elkin via TKO in the second round. ”The Lady Killer” is on the prowl!