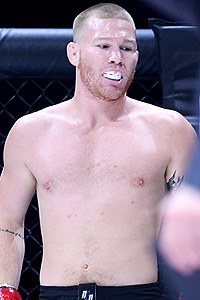 In MMA, there will be times where fighters are pushed into deep waters and must use every tool at their disposal in order to bail themselves out. In today’s episode of Across The Pond, you will meet a wily fighter whose gutty perseverance and no quit attitude make him a welcome edition to the mix in the bevy of talent rich Lightweights the UFC has to offer. A professional since November 2014 and representing Law MMA and Gracie Tampa South, 27 year old Matt Frevola owns a 6-0 record consisting of three submissions, one knockout and two decisions.

In his MMA debut at WSOF 15, Matt submitted Josh Zuckerman in the first round via triangle armbar. Then he defeated Mike D’Angelo at RFC 35. Matt defeated Emmanuel Ramirez via unanimous decision at AFC 25. He submitted Trent McDade in the first round via guillotine choke at RFC 37. At Titan FC 43, Matt defeated Raush Manfio via unanimous decision. In the main event of Dana White’s Tuesday Night Contender Series 8 Matt tapped out Jose Flores in the second round via arm triangle choke and secured a UFC contract in the process. If you mess with ”The Steamrolla” prepare to be flattened!