Welsh bantamweight standout Brett “The Pikey” Johns will be putting his perfect 15-0 professional record on the line at UFC Fight Night Atlantic City in April.

Johns will be matched up against Aljamain “Funk Master” Sterling and his 14-3 record.

Sterling’s last outing was a heavy knockout loss to Marlon Moraes in December 2017. That setback left him with just 2 wins in his last 5 fights after starting his career a perfect 12-0.

Despite his recent run of bad luck in the octagon, Sterling will present Johns with his toughest test yet. He has a strong wrestling background and is a 9 fight UFC veteran with a UFC record of 6-3. Those 3 loses have come against some notable opponents in Bryan Caraway, Raphael Assunção and the previously mentioned loss to Moraes.

Johns hasn’t fought since his quick fire submission win against Joe Soto at the The Ultimate Fighter 26 finale last December. Soto was the unfortunate victim of a scarcely seen Calf Slicer from Johns which made headlines due to its rarity. The 30 second finish of Soto was the Welshman’s first submission victory in the UFC and it was certainly an impressive way to get off the mark. 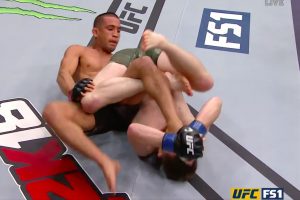 The quick submission win for Johns followed his two previous UFC victories against Albert Morales and Kwan Ho Kwak, both of which came via unanimous decision.

UFC Fight Night Atlantic City will take place on 21st April 2018. The updated list of confirmed fights for the event is below:

SBG Ireland prepares for big return to Jordan at Brave 10