by MMA UK
in Bellator
0

After one of the craziest weeks in MMA history, this weekend again offers multiple options for us hardcore MMA enthusiasts. Kicking off this weekends action will be Bellator 197 at 9 pm EST from St. Charles MO. live and free on the Paramount Network. The four-fight main card was originally headlined with a rematch from Bellator 180 where“Iron” Michael Chandler lost his Bellator lightweight strap via round 1 doctor stoppage to Brent Primus.  Unfortunately, Primus suffered a knee injury mid-March so his first title defence is on hold. Coming off of 3 losses in his last 4 fights, Brandon Girtz steps in on short notice. Regardless this main card is set up to entertain.

The first bout on the main card will feature two of Bellator’s top welterweight prospects.  Logan “Storm” Storly   (7-0)  will make his third Bellator appearance against Joaquin Buckley (8-1) making his fifth Bellator appearance. Both fighters could be considered to be coming off of sub-par performances in their last fight even though both were victorious. Buckley won a split decision at Bellator 185 against Vinicius de Jesus (5-2) and Storley is coming off his first career decision win after six consecutive TKO.  In this matchup I expect the 4 time NCAA All American wrestler and LFA vet Storely to use his grappling to pick up the win via ground and pound late in the fight. This will be his best win to date and also solidify his place as a top Bellator welterweight prospect.

The second Bellator 197  Main card fight could be the fight of the night. Kevin “Baby Slice” Ferguson Jr (2-1)  son of the late great “Kimbo Slice”  will square off against   Devon Brock (1-0) in a catchweight bout at 160lbs. Both fighters entire pro career to date have been with Bellator with Baby slice winning his last two fights in the first round.  Brock winning his pro debut at Bellator 192 against Khonry Gracie (son of MMA legend Royce Gracie) unanimous decision. Although Baby Slice has the pedigree and a 2 fight win streak Brock could prove to be a handful having been the distance in a 3 round fight.  Anyway its “sliced” this is a very close matchup of 2 young exciting fighters I hope to see Bellator build with in the future.  Although his first 2 opponents combined record is 1-2, look for Baby “Slice” and Devon Brock to battle to a decision in a thriller with Slice pulling out a possible split decision. 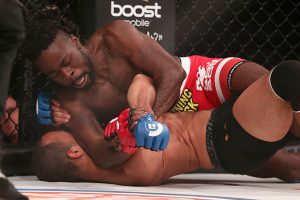 The Co-Main Event will feature home-grown Bellator star  AJ “Mercenary” McKee  (10-0) versus fellow BMMA  6 fight veteran Justin ” The American Kid” Lawrence (11-4).  With McKee making his pro debut all the way back at Bellator 136 and Lawrence debuting shortly after at Bellator 138 both fighters will have plenty of high level pro MMA experience to draw from.  Since both men having winning records  I see the equalizer being McKee’s athleticism and headliner experience.  Bellator needs stars just to tread water next to UFC‘ wake and McKee has been carefully groomed to be just that.  I anticipate McKee to push the pace and look for the highlight reel finish that has eluded him in his last two trips to the cage. I like McKee to win at the end of first round or early second via TKO. 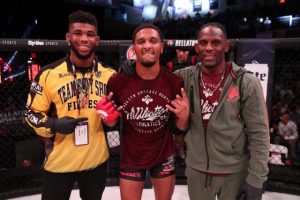 The Main event is an exciting matchup between longtime lightweight Bellator fighters “IRON” Michael Chandler (17-4) and Brandon Girtz (15 -7). This fight comes with a 100% guarantee “Iron Mike “ is pissed off. Chandler still wants to get revenge for his loss to Primus at Bellator 180. On top of that, his last fight left something to be desired, a decision win over Goiti Yamauchi (22-4) at Bellator 192. Girtz is fresh off an impressive 1st rd TKO, Luka Jelcic in December at Bellator 190. He is hoping to play spoiler on Chandler’s march back to the belt but I doubt Chandler will be in the mood for diplomacy.  I expect “Iron Mike” to be in championship form and explode for an early KO against an outclassed Girtz. 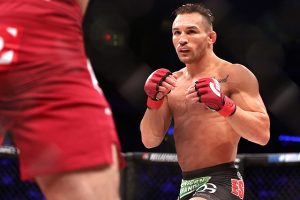 When Chandler gets done calling out Brent Primus I think we fight fans will look back at Bellator 197 as an entertaining fight card with memorable moments.  The card does feature some of Bellator’s best young talent as well as arguably 2 of its biggest stars. Great value considering its free and a great warm up to UFC on FOX 29 Poirier vs Gaethje on Saturday.