Soren Bak – The next Scandinavian Superstar?

Whilst exploring a variety of topics to talk about in my first MMA article, a range of thoughts crossed my mind; UFC superstars, fighter branding, sponsorships, and Bellator’s heavyweight Grand Prix to name a few. But surprisingly the article I wanted to write about involves is a mix martial artist by the name of Soren ‘The True Viking’ Bak.

The image of Bak before a fight and after a fight is always striking to the eye.  As he takes on the persona of a Viking, coming out to the cage dressed in the appearance of a Denmark warrior and carrying out to the cage an axe.  Looking more like a scene from an action movie than the entrance to an MMA fight.

After his fight, which has usually finished via submitting his opponent, he places his ancestors’ clothing back on and raises his axe high into the air in celebration.  With his face covered in his opponent’s blood, the nickname ‘The True Viking’ is a fantastic name, image and brand which can be exploited by the young fighter to raise his popularity.

The 25-year-old Bak holds a professional record of 10-1 and is coming off a highly entertaining and impressive submission victory via arm triangle in the second round over former Cage Warrior Lightweight Championship contender Alexander ‘Bad Romance’ Jacobsen in the co-main event at Cage Warriors 93 Gothenburg.

Jacobsen was no easy obstacle for the Denmark native Bak.  After losing to reigning and defending Cage Warriors Lightweight Champion of the World Chris Fishgold at Cage Warriors 88 in Liverpool,  Jacobsen was able to hit back with an impressive TKO victory over Lawrence Fitzpatrick in just 14 seconds of round number one at Cage Warriors 90.

It was apparent the Norwegian Jacobsen had power and striking ability to end a contest after his 14-second destruction of Fitzpatrick.  However, Bak dominated Jacobsen on the feet and on the ground in Gothenburg.  Bak on the evening was entertaining and exciting to watch in all of the exchanges, where he often looked the superior of the two athletes.

Once Bak had finished the bloodied Jacobsen in round two he took no time in calling out Cage Warriors biggest superstar Paddy ‘The Baddy’ Pimblett.  A showdown between the two at Cage Warriors 96 in September looks to be on the cards.  With Pimblett confirming already to MMA Fighting that he would happily take on Bakin a highly anticipated fight.

If Pimblett VS Bak does happen, it will undeniably be Bak’s biggest challenge and fight to date.  However, a victory over ‘The Baddy ’at 155lb would surely push Bak to become one of Europe’s and Cage Warriors biggest prospects.  A possible future UFCfighter, following in the footsteps of other Scandinavian fighters such as Nicolas Dalby, Emil Meek and most notably Gunnar Nelson.

Soren Bak is certainly a name MMA fans need to listen out for.  And if the fight between Pimblett is announced, it will become a name the UK fan base will be hearing a lot more of. Bak is exciting both in the cage and out the ring and has a skill set to scare any of his opposition.

His persona of ‘The True Viking’ is refreshing, catchy, exciting and draws attention.  Whilst most importantly he has the skill set to match.  There is a good chance we could by the end of this year be saying ‘And New, The True Viking’.  The Cage Warriors title can open up many opportunities for a fighter.  Including opportunities to perform under the biggest banners, MMA has to offer. 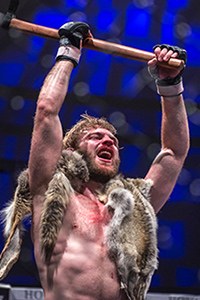