Interview with Craig ‘The Thundercat’ White

by MMA UK
in Interviews, UFC
0

Craig is a newly signed welterweight fighter with the UFC. His fight record is 14 wins and 8 losses and made his UFC debut at UFC Liverpool where he stepped in the octagon with just 2 weeks notice to fight Neil Magny, who is ranked #8 in the welterweight rankings.

Unfortunately, due to a big weight cut and some heavy knees to the body, Magny got the win in the first round but I think White gave a good example of himself and will be back better than ever.

By day 9-5 White is suited and booted in his office job as a financial services adviser but he’s been a top prospect on Cage Warriors and was supposed to be fighting for the welterweight belt after tearing through his last four opponents, stopping all of them with strikes or submissions.

I first came across Craig back in June of 2012, at Strength and Honour 13 in his hometown of Exmouth, Devon. It was put on by Dave Matthews, Craig’s longtime coach from Lion’s Den. I was also making my MMA debut, which I won (I might add, go me) but Craig lost. You could tell he had a very large following and was extremely popular with the local crowd.

I caught up with Craig “The Thundercat” White via Facebook and asked him if he would mind answering some questions for MMA UK, which he did without hesitation, which I was very grateful for.

JP – Have you been and trained at any other gyms other than Lions Den?

Craig- I’ve gone to other gyms to spar with guys my weight but have never gone elsewhere for training outside of that. I’ve worked closely with the guys MAT Academy, Tillery Combat, Trojan Freefighters and Renegade/Force MMA over the last year and intend to continue to work with them and also others as well. But my skill set has been grown developed by Dave Matthews and my team at Lion’s Den over the years and I have no intention of changing that with my structured training.

JP – If you had the chance would you like to go and train in the USA like Ben Reece (a teammate and a Cage Warriors fighter) at Team Alpha Male?

Craig – If I was to go abroad to train I would likely look to go to Tristar or JacksonWink. Though I have a life and a job, so finding the time to be able to commit to that is difficult. So, for now, I’m going to stick to working with the high-level UK guys that are around, which I would say is equally as good as heading over there anyway.

JP – How are you feeling mentally and physically from the Magny fight, are you injured, or ready to fight?

Craig- I had no injuries from the fight at all and mentally was just gutted. I felt comfortable there.

JP – How did the weight cut for the Magny fight affected you on such short notice?

Craig – I felt great considering the amount I cut. I was able to rehydrate and refuel effectively and felt like I hadn’t just put myself through 2 weeks of hell. It wasn’t until I took a knee to the body that I realised just how much my body had been hit by the cut and when the second knee got me, it just started shutting down. Most people think it was the knee to the head that started the finish to the fight but it was actually the knee to the body just before it that did.

Craig- I don’t have my eyes on any particular opponent. I just know that whoever it is, with a full fight camp, it isn’t going to matter as I’ll be coming away with the W regardless. I’m happy to fight anyone, anywhere and just want to get back in there. Ideally, October time would work really well for me, as it gives me a good amount of time to prepare.

JP – What do you like to do when you’re not training?

Craig – I’m a big fan of documentaries, anime and gaming. So when I’m not working, training or attempting to sleep I’ll be spending my time doing those things. I am also a big fan of food and spend a lot of my spare time eating either cheesecake or pizza.

Craig – Anything and everything. I just eat what I want all the time, hence having to cut so much weight!

JP – What aspect of training do you like and find the hardest e.g. BJJ, running or dieting?

Craig – I love sparring. There’s no better feeling than getting hit and just throwing down with someone, knowing after you’ll still be mates. It’s one of the best things about being part of a team which has no ego at all. The thing I find the hardest is structuring and finding the time for the amount of training I want to do, there’s never enough hours in the day. But I manage to make it work.

JP – What are your plans for the future?

Craig- I’m just going to keep on as I am. It’s worked for me so far and I’ve got to where I am doing it, so it must work, right?

JP – Anyone you would like to mention?
Craig – My team at LD Fighters, the guys at Exmouth ABC who give me sparring rounds time to time and all my family and friends. And my dog.

JP – Thank you for taking some time out to answering my questions, I know you’re a busy guy. My self and MMA UK wish you all the best and hope to see you in the octagon fighting soon.
. 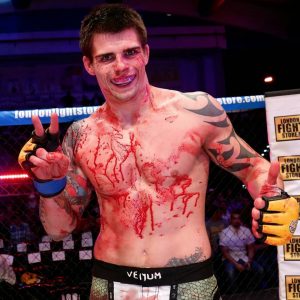