Recently I’ve been down a very specific YouTube rabbit hole most likely due to watching a little too much Joe Rogan podcast in which bare-knuckle fighting and getting rid of padded gloves have been brought up on more than one occasion. This has led me to believe that there is a real resurgence happening with regards to a more classic form of pugilism. Stateside has seen a recent uptake in the sport with the cleverly named Bare Knuckle Fighting Championship having its first sanctioned bought in Wyoming earlier this year. This saw known fighters such as former UFC strawweight/flyweight Bec Rawlings take to the ring to battle it out.

A little closer to home we have a lengthier lineage of sanctioned Bare Knuckle fights which continues to thrive yet remains mainly an underground scene although the most recent event BKB 11 did take place in June in the O2 Arena in London. Many of the promotions, however, continue to operate in a manner which is drastically different from the polished look of professional MMA that we have come to know and expect, which is expertly highlighted in the docu-series Bare Knuckle Fight Club (Netflix) which I would recommend to anyone interested in seeing what the sport entails. 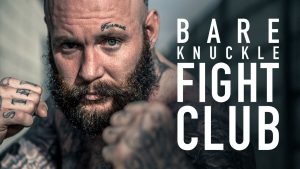 Now, although all this bare-knuckle boxing stuff is very entertaining what I’ve really been setting the scene for is this next sport that has drawn almost all my attention recently. Enter Myanmar Lethwei (formerly known as Burmese bare-knuckle boxing) affectionately known as the art of nine limbs. Wait 9 limbs? Hang on a minute, fists that’s two, feet that four, elbows six, knees eight and one more, what could it be? That’s right. Headbutts are legal. Somehow it still gets crazier, here is a brief rundown of the very limited rules, courtesy of Wikipedia.

It seems insane that in order to win a bout you are required to knockout your opponent potentially twice but I can tell you from my brief experiences that this ruleset means there is no such thing as a boring Lethwei fight.

This dive into Lethwei inevitably led me to come across a much beloved Lethwei fighter referred to as the “King of Lethwei”. Dave Leduc a Canadian born Lethwei fighter also known as “The Nomad” due to his travels in pursuit of martial arts perfection. Leduc is a fascinating character, whose story certainly deserves an article to itself, who became the first fighter not from Myanmar to become the open weight world champion in 2016 and defended his title by first-round knockout only last night. Leduc has been wholly accepted by the fans of the sport for not only his fighting prowess but his strict adherence and practice of the traditional values of the sport. It is definitely worth your time checking out his Instagram and Youtube channels.

Currently, Lethwei is mainly still centred in Myanmar with sanctioned shows also taking place in Japan. I personally would love to see an uptake in bare-knuckle fighting into the mainstream especially Lethwei as I believe it provides a high-level spectacle of combat sports that is always a blast to watch.