Is Anderson Silva Still The GOAT?

The ‘greatest of all time’ debate is one of the more popular ones in sports. Be it boxing, football or MMA, fans have an obsession with choosing one athlete, and giving him/her the ‘GOAT’ label. In the mixed martial arts world, you’ll hear names like Jon Jones, Georges St-Pierre, and ‘Mighty Mouse’ thrown around a lot, and in fairness, there is no definitive answer. However, for the sake of this article, we’ll dive into the argument, and remind you of a certain ‘Spider’, who may still lay claim to that GOAT title.

At UFC 234, forty-three-year-old Anderson Silva steps foot into the octagon against a man many deem the new version of Silva, Israel Adesanya. Israel’s admiration and love for the Brazilian have been well documented, making the build-up to this fight all the more fascinating as it is quite literally the young lion looking to take the old lions thrown. But with old tweets of Israel cheering on Silva in his epic rematch with Chael Sonnen in 2012 surfacing online, reminding us of years gone by, fight fans have been forced to remember just how good the former longtime middleweight champion was.

Unfortunately, Silva’s historic run of dominance came to an end in the summer of 2013, just before the Ronda Rousey/Conor McGregor era took the UFC to a new level of popularity. So a lot of fans today have only heard and seen snippets of the Brazilian’s prime years, and thus, one of the reasons so many people have stopped mentioning Anderson Silva in these discussions of greatest fighters.

When you sit back and analyse what makes someone great and memorable, there are a few boxes that need to be ticked. They have to be a dominant champion, beating the elite competition in the process. They have to entertain us with their performances inside the octagon, while providing us with highlight reel-worthy moments, and upon reflection, you could say no one has tied these things together quite like ‘The Spider’.

With the exception of a few opponents, Demetrious Johnson never fought world class opposition like GSP and Silva. Georges St-Pierre has perhaps the best record as far as wins and losses go. But unfortunately, one would be hard-pressed to come up with a long list of his fights that left you wanting to see more. He was incredible at implementing his game plan, and his success rate is undeniable, but a lot of GSP’s fights were a tad dull. And when it comes to Jon Jones, well, an entire thesis could be written on why Jones cannot be considered the greatest mixed martial artist of all time.

Silva no longer holds the record for most title defences, but his record of sixteen consecutive UFC wins still stands. Also, when looking back at the man’s fights, where do you start? How many times were we left in awe at his ability to not only pull off an impossible manoeuvre but do it against the very best fighters in the world? His front kick knockout of Vitor Belfort has been on repeat since 2011, and the visual of that kick also became one of the main images for a UFC game. The ease in which he knocked out Forrest Griffin, standing against the cage allowing Stephan Bonnar to throw punches, and even the way he viciously broke Rich Franklin’s nose with his legendary knee strikes. It was one mind-blowing moment after another.

To compare anyone to Muhammad Ali feels wrong. However, if one UFC fighter reminded us of Muhammad Ali, it was Anderson Silva. His calm demeanour, his confidence, and at times, arrogance combined with incredible ability made us feel like we were watching the MMA version of Ali. Much like people still play and marvel at Ali’s fights, fans now do the same for Silva’s incredible library of knockouts. 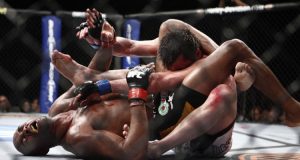 Also, like all great champions, ‘The Spider’ has taken great risks. Who can forget one of the greatest comebacks in MMA history when Silva submitted Chael Sonnen in the fifth round with broken ribs at UFC 117. How about when he stepped up to face Daniel Cormier on two days notice and even stunned Cormier with a kick to the body. True champions gamble on themselves, and it’s another reason why he is such a special fighter, it’s also why he received a standing ovation after his fight with Daniel Cormier.

Although he has accomplished these great feats, fans are quite fickle, and they can forget a fighters accomplishments at the drop of a dime. Father time is catching up to the great Brazilian, which was evident in his fight against Derek Brunson, where he won a controversial decision. But when we remember Mike Tyson or Muhammad Ali, we don’t think about how their respective career’s end. We think about their great accomplishments and the excitement both men brought to the ring.

It’s clear that Silva’s time in the cage is coming to an end. When he does hang up his gloves, one would like to think people will start to remember how special he was to this sport. But for now, a motivated Anderson Silva defeating the prospect Israel Adesanya might be enough to remind people who the true GOAT of MMA is.