All-time Olympic Great David Schultz needs to introduction due to his undeniable legacy in freestyle and collegiate wrestling. National Champion, World Champion and Olympic Champion, the man simply put was an all-time great, his style made him ahead of the game. One could wonder, just how ahead of his game was he? The answer is surprising, the man resonated the prowess of an elite submission grappler before Submission grappling was popular, before the days of the UFC, ADCC and before there was any hype about Vale Tudo outside of the Brazilian circle from their high society to the favelas, in terms of the World, very little was known about submissions. 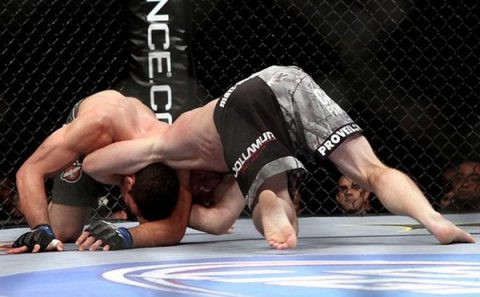 What Dave was doing would technically be viewed as illegal, however, the confusion about how he executed the move made it hard to determine what had actually been done. Off of the front headlock position he would tighten the Gable grip under the chin and around an arm before being in a high position placing his weight on the back of his opponent’s neck and circling off to the side of the arm he is controlling before squeezing. The final result of this would be a slow pressure choke that managed to choke his opponent unconscious just long enough for him to roll them over to their back for him to secure the pinfall for victory.

Now one could wonder just how effective this technique this would be in competitive MMA or against an elite level grappler with the knowledge of Jiu-Jitsu. Well, this technique was actually used in an MMA match at UFC 117 against 4x ADCC Medallist Ricardo Almeida against former UFC Welterweight champion Matt Hughes. Hughes managed to clip Almeida on the feet with a punch before securing a Dave Schultz front headlock and managed to choke Almeida unconscious.

Not bad for a chokehold popularised in the 1970s….