Fighters At A Glance: Chris Weidman

Today we’re going to look at former UFC Middleweight Champion Chris Weidman and his career in the UFC.

‘The All American’ Chris Weidman made his UFC debut way back in 2011 since then during his time in the UFC he has won ten and lost five of his fifteen bouts. Four of his 10 wins in the UFC have been the way of knockout also three by submission and three going the distance.

Weidman began his UFC career by defeating Alessio Sakara after going the distance and earning himself a unanimous decision win. He then followed that win with a first-round submission win over Jesse Bongfeldt. Chris then topped the year off with another first-round win defeating Tom Lawlor via submission.

The ‘All American’ started the new year 2012 off with an impressive unanimous decision after a 3 round fight with a great fighter in Demian Maia. Chris finished 2012 off early in July with himself headlining his very first event in the UFC after facing Mark Munoz at UFC on FUEL TV: Munoz vs Weidman. During this match, Weidman knocked out Mark Munoz with an elbow in the second round.

After almost a year off in 2013 and after his knockout victory over Munoz Chris earned himself a title shot against then-champion and someone who a lot of people think of as the greatest ever to fight in the octagon Anderson ‘The Spider’ Silva. During the fight, Silva was up to his usual tricks of showboating during his fights, and after trying to get on the nerves of Weidman in the second round, Silva found himself on the receiving end of a combination of punches to find himself knocked out and losing his title to Chris. Then in December of the same year, Weidman defended his title against Silva again defeating him in the second round. 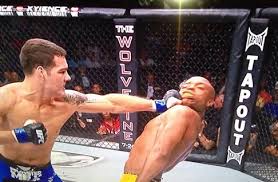 After the second Silva fight, Chris then went on to defend his title another two times against Lyoto Machida and Vitor Belfort. Weidman won both of those fights by way of knockout. After his two year reign as Middleweight Champion Chris went on to lose the title to Luke Rockhold. After the Rockhold fight, Weidman went on to lose another 2 fights against Yoel Romero where he was brutally knocked out with a flying knee and then he was knocked out by Gegard Mousasi. 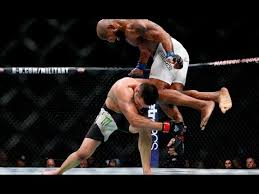 Since his loss to Mousasi, he has defeated Kelvin Gastelum and loss to Jacare Souza. Then after his fight with Jacare, he moved up weight from Middleweight to Lightheavyweight where he lost to Dominick Reyes in his 205 lbs debut.

What will be in store for Chris in 2020? Will he stay at Lightheavyweight or will he move back down to Middleweight? Only time will tell.