5 Incredible UFC Championship Performances To Revisit While in Quarantine

The MMA world, the sporting world, and pretty much the entire world itself have all been put on pause by the sudden pandemic, resulting in lots and lots of very bored sports fans. With no Saturday fight nights to bookend our weeks, for the time being, many are sure to desperately dive into UFC Fight Pass to get the fight fix they crave, and so I thought I would offer some guidance in these trying times. Every weekend we’re treated to the cream of the crop when it comes to MMA, as the very best athletes in the world clash so that one can take a step up that constantly shifting divisional ladder. Impressive showings aren’t that rare in the UFC, but occasionally you get a special one. Whether it’s a young underdog violently usurping the king, or a champion reminding you why they have that belt in the first place, some performances double as truly remarkable athletic triumphs, and unforgettable sporting moments. 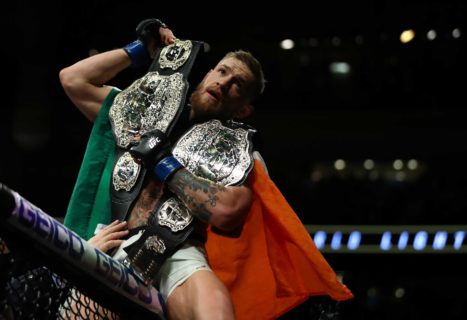 With Conor McGregor’s heated rivalry with Khabib Nurmagomedov showing no signs of cooling down and his 13 second knockout of Jose Aldo being replayed in every video package under the sun, it’s almost easy to forget about what is, in my opinion, his finest moment. Inside sold-out Madison Square Garden at UFC 205, McGregor completely dismantled ‘The Underground King,’ Eddie Alvarez to become the company’s first-ever two-division champion. History-making aside though, the ‘Notorious’ one’s performance was nothing short of a masterclass. Impeccable timing and accuracy, brilliant setups for that hammer-like left hand, and confidence and swagger possessed by few others; On this night, Conor McGregor was able to harness each of his weapons to perfection and show us in just 7 minutes what all of the hype was REALLY about. This fight doesn’t detract from Alvarez’ legacy, but it may just be the crown jewel of McGregor’s. For all of the Irishman’s flaws you can pick at, his performance that night cannot be touched. 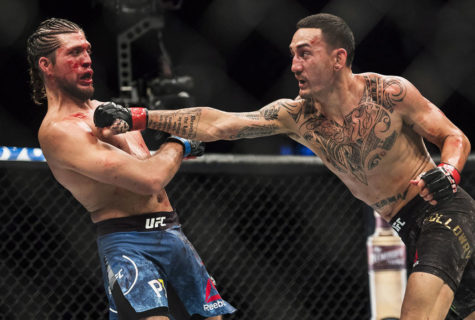 Max Holloway’s return to Octagon in December 2018 was shrouded with questions and scepticism. After two-fight cancellations due to concussion-like symptoms, many were concerned for the champion’s health, and how this may affect him going into his title defence against then-undefeated ju-jitsu wizard Brian Ortega. All doubt was put to rest however, across 4 of the most exhilarating rounds you will ever watch. Holloway was a man possessed that night; showing dazzling distance control, and fighting at a pace that was nothing short of breathtaking (and I mean breathtaking in the sense that I felt out of breath just watching the bastard). Holloway landed a record-breaking 290 significant strikes across the 4 rounds. Brian Ortega got punched 290 times in just 20 minutes. Insanity. While ‘T-City,’ showed incredible heart, and even had some impressive moments scattered across the beating, this fight was a nothing but a showcase for Max ‘Blessed’ Holloway. The pride of Hawaii walked into the cage that night with critics questioning whether he was even well enough to compete. He walked out 20 minutes later as the featherweight GOAT. 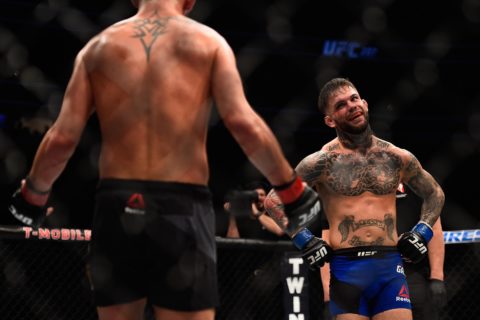 After years of Dominick Cruz swatting away any and all challengers to his throne atop the 135lb division, at UFC 207 a then 25-year-old Cody Garbrandt was somehow able to stay one step ahead of the smartest mind in the sport. ‘No Love,’ managed to crack the code that is Cruz’ trademark awkward style, and then proceeded to outclass him across all 5 rounds. With incredible hand speed, McGregor levels of mockery, head movement straight out of a Matrix film, and a refusal to fall for Cruz’ constant feinting, it was the perfect cherry on top of Garbrandt’s ascent to the very top. While the fight itself is a technical joyride from start to finish, it’s almost bittersweet to rewatch knowing the misfortune both men have fallen on since this bout. With Garbrandt still in his prime despite losing his last 3 fights, all we can do is pray that we someday see another career-defining display of technical brilliance like this one. 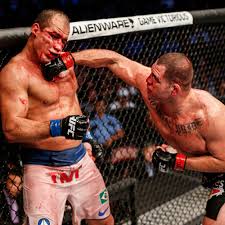 Just one year after being quickly disposed of by dos Santos in his first career defeat, Cain Velasquez recaptured his heavyweight by absolutely dominating ‘Cigano,’ across all 5 rounds. From beginning to end, Velasquez refused to take a single step backwards as he fought at a pace rarely seen amongst heavyweights, achieving triple-digit strikes and double-digit takedowns in the process. While the toughness shown by dos Santos must be commended, this was nothing short of a beatdown. In the wonderful world of fantasy matchups, I truly believe that the Cain Velasquez we saw that night could beat any heavyweight we’ve ever seen. And yes, that includes Fedor. 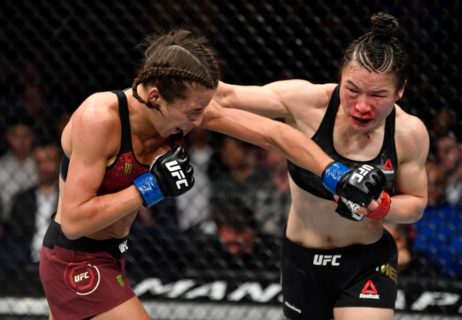 I was hesitant to include this fight, as it may still be too soon to relive the unreal levels of brutality that took place that night. The fact remains however that it was a truly special contest, and easily the greatest women’s fight of all time. Both women left absolutely everything in the octagon that night, with Zhang Weili edging the narrowest of decisions to retain her belt. The drama and violence of this fight was nothing short of astounding, but what lands it on this list of great performances is the fact that over 5 rounds of hell, neither fighter took their foot off the gas pedal for a single second, to their own physical detriments. Zhang Weili, who endured her share of grisly punishment, threw bombs for 25 minutes straight as she proved that she was a true champion who could hang with the very best. And as for Joanna Jedrzejczyk, she was as technically proficient as ever as she threw a staggering 360 significant strikes (with most of those coming AFTER suffering the haematoma!). Even in defeat, she showed that she is still, ‘The Boogeywoman.’ But after what she gave that night, she truly has nothing left to prove.