“He pitched a no hitter!” – Jack Shore continues to lead the way for Welsh MMA

by Louis Evans
in MMA News
1

Despite its rich fighting heritage, Wales mysteriously remains the only home nation yet to hold its own UFC event.

Nevertheless, the UFC hierarchy seem frustratingly slow to acknowledge and reward the hotbed of talent coming off the Principality’s production belt. But as Abertillery’s Jack ‘Tank’ Shore rolls into the fore, now might be the ideal time for the fight fraternity to pay attention to England’s noisy neighbours.

“He pitched a no hitter!”

The rising Welsh warlord squared off with Louisiana’s Aaron Phillips (12-4-0), – a late hour stand-in for Brazilian Anderson dos Santos who flunked a Covid-19 test – and, capitalising on Phillips’ ill-conceived superman punch, Shore slammed his American adversary to the mat then tactically executed with a rear naked choke to finish the fight, half way through the second round.

Even prior to this stellar performance, suffocate specialist Shore earned props as one of Europe’s brightest bantamweight prospects. Back in September 2019, his textbook third-round triumph – again ending with that signature rear-naked choke – over California’s Nohelin “Suave” Hernandez at UFC Copenhagen brought widespread  accolades, plus a $50,000 Performance of the Night bonus, while advancing his professional record to a perfect 12-0-0.

The brushing aside of Hernandez shot Shore to the attention of UFC head honcho Dana White, who lauded him, “the UK’s hottest prospect” in a UFC Copenhagen pre-fight segment. And it’s easy to believe the hype. Before vaulting to the UFC, Shore amassed an unblemished 12-0-0 amateur CV and has since continued his unbeaten ways whilst romping to the Cage Warriors Bantamweight Championship. 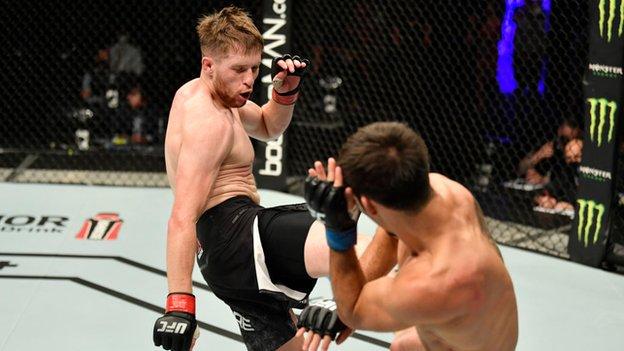 Shore is tutored by his father, Richard ‘Shakey’ Shore, and the pair recently opened the ‘Tillery Combat MMA’ in the heart of the Welsh Valleys. The futuristic fight facility is home to other notable MMA figures such as the aforementioned UFC veteran Jack Marshman and now bantamweight rival Brett ‘The Pikey’ Johns, who himself won accolades after winning a narrow points victory against Montel Jackson on Saturday night’s UFC Fight Night: Figueiredo vs. Benavidez 2, bringing the Milwaukee striker’s three fight win streak to a sharp end. No doubt, with new infrastructure comes new talent and it appears the foundation is in place for Shore men to lay a lasting legacy outside of the bright lights of the UFC.

Thursday night’s (16/07) performance marked the end of a career-long 10 month lay-off for the 5ft 8in Shore, who was originally scheduled to star on the undercard of UFC Fight Night London last March, only for that plan to be kayoed by Covid. The 135lb choker, however, remains unfazed by that temporary pothole to his ascent. Whilst conceding in an interview with John Hyon Ko that his initial goal of 3 starts in 2020 might be unduly optimistic, youth is clearly on Shore’s side. Plans of title contention can be placed on hold whilst he acquires the crucial experience that can’t be bought, borrowed or stolen.

pects of advancing towards the sport’s summit. In an interview with Pundit Arena in April 2019, the Welsh warrior highlights how he turned down an initial offer from the UFC, years before his debut:

“I have no regrets, I was very young at the time. I was 20 years of age or 21 years of age, had only three or so pro-fights to my name. To go there at the time would have been too much too soon for me. Now, I feel like I’ve gained valuable experience and I’ve gotten fights against very high-level opponents where I continue to perform and prove the level that I’m at.”

If Shore continues to progress at his present meteoric rate, it seems only a matter of time before this Prince of Wales ascends to the UFC Bantamweight throne.