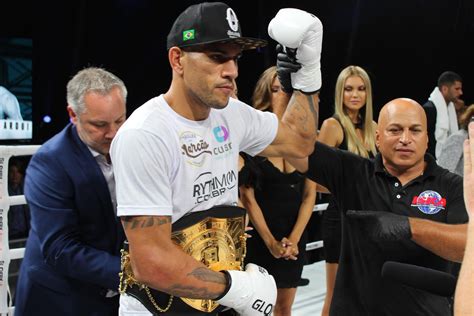 Alex Pereira has had an illustrious kickboxing career, notably capturing both the GLORY Middleweight and Light-Heavyweight World Titles. The Brazilian powerhouse holds a 41-6 record, with thirty of his wins coming by knockout. “Po Atan” (Stone hands) holds alarming power with all his strikes, but his left hook is particularly thunderous. This is the strike which brought him the most fame, when he finished now UFC Middleweight Champion Israel Adesanya.

The pair first met at Glory of Heroes 1 in 2016, with Pereira defeating Adesanya by Unanimous decision. They re-matched a year later, at Glory of Heroes 7. The first round was hotly-contested, with Adesanya scoring a standing knockdown, and nearly finishing Pereira. However, Brazilian rallied in the second. Forty seconds in, a cross, followed by his signature left hook floored “The Last Stylebender” who lay dazed as Pereira bent down to scream victoriously in his face. Since then, Pereira has gone 9-1, winning both GLORY Championships on this run. During this time, he also holds a victory of another of Adesanya’s defeaters, Jason Wilnis. Pereira finished Wilnis by first-round flying knee knockout.

After his second defeat to Pereira, Adesanya began his career in MMA. He has amassed a 20-0 record, which includes capturing and twice defending the UFC Middleweight Championship. He also holds 3rd place on the men’s pound-for-pound rankings. Pereira continued in kickboxing, before following in his old adversary’s footsteps.

Previously holding a 2-1 record in the sport, Pereira returned to MMA after a three year hiatus, signing with the LFA. In his comeback last Friday, he brutally finished Thomas Powell by knockout. The power differential was evident, with Pereira stunning Powell numerous times, before finishing him with the aforementioned left hook. Powell failed to gain consciousness for several minutes, lying face-down on the canvas, further emphasising the extent of Pereira’s power.

Whilst the pair’s MMA careers are starkly different, if Pereira can continue to develop on the regional scene, a trilogy between the two may materialise in the future. Pereira could have already signed with the UFC, and with favourable match-ups, may have already begun to establish himself as a legitimate title threat. Instead, the Brazilian chose to swallow his pride, and continue his growth on the regional circuit.

A third matchup between Pereira and Adesanya has several interesting facets. Their second contest was a fiery affair, with Adesanya choosing to brawl with Pereira, a strategy we haven’t seen him adopt since this knockout loss. It is difficult to recognise “The Last Stylebender” of today, with the reckless fighter in the first round of this bout. Moreover, with a lacklustre showing against Yoel Romero at UFC 248 in March, which saw the champion steer clear of Romero’s power, we might see a timid Adesanya, who instead looks to outpoint Pereira.

Conversely, with his quick knockout on Friday, Pereira was unable to show any improvements on the ground. Takedown attempts from his opponent were easily stopped, however, this should be expected against a fighter with Powell’s record (4-5). Pereira’s lone MMA loss came via rear-naked choke to Quemuel Ottoni. Despite this being over five years ago, Pereira has previously shown vulnerability on the ground. It would be shocking if Adesanya, a renowned MMA striker, chose to try and capitalise on a potential Pereira weakness, and attempt to take the fight to the ground. Adesanya’s ego may prevent him from this, but with the pair’s history, it is a worthwhile consideration.

Pereira is now 33, and with limited MMA experience, a rekindling of his rivalry with the Middleweight champ may be wishful thinking. However, with his pair of victories, and a notably vicious knockout over Adesanya, Pereira may have enough time to quickly build a resume, to make a trilogy with Adesanya undeniable. Whilst his signing with the LFA is wise, he will need to quickly gain experience, and enter the UFC soon. Moreover, with the company’s history of match-making on fan clamour and monetary gain, if Pereira can continue to win, the UFC may book a trilogy between the two. It could turn into a mismatch, but if an undefeated Champion faces a rising contender, who has finished him in another sport, the storyline writes itself.