The wait is finally over. BRAVE CF 46, the truly global promotion’s first-ever show in Russia, has a main event confirmed. And it’ll be a big one. Previously confirmed as part of the card’s headliner, Super Lightweight champion Eldar Eldarov is set to defend his title against Brazil’s Leonardo Mafra. 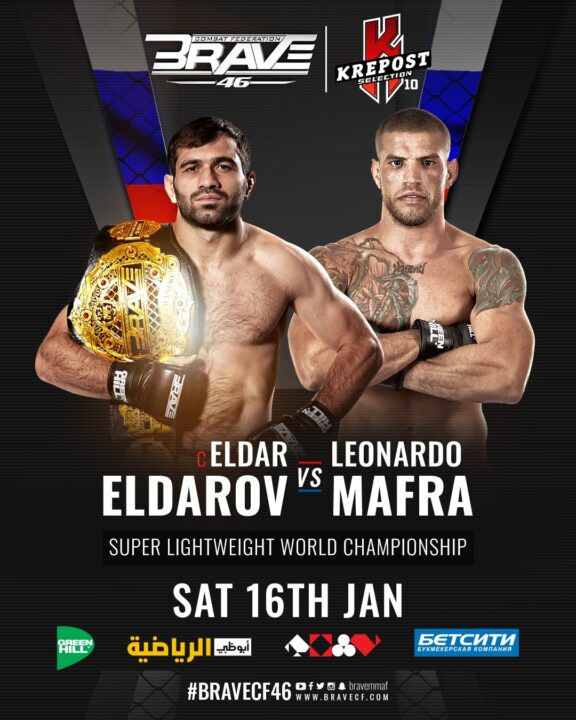 Mafra is arguably the toughest challenge ever faced by the Bahraini powerhouse, an experienced and versatile mixed martial artist fighting out of one of the most accoladed camps in the entire world, King’s MMA, in California (USA), under the mentorship of Master Rafael Cordeiro.

But the same goes the other way around. Eldarov is also the most challenging puzzle that Mafra will ever take on to solve. With the combination of world-class level wrestling, physical imposition, and non-stop pressure, Eldarov has been obliterating the competition since he first started in Mixed Martial Arts.

With a professional record of 12 wins and only one loss, Eldar Eldarov has won all but his first pro fight. Eldarov is on a 4-win streak under the BRAVE CF banner, which dates back to the promotion’s very first card in September 2016.

Over the last years, Eldar has split his time between his own professional career and the shaping of the next generation. As the head coach of the laureate Bahrain National Team, Eldar led the Bahraini squad to the number one spot in the IMMAF Amateur world rankings.

Leonardo “Macarrão” Mafra holds a professional record of 15 wins and only 5 losses. A veteran of the very first season of the reality show “The Ultimate Fighter Brazil”, Mafra is a fan favourite in Brazil and comes off a dominant win over Djamil Chan.

BRAVE CF 46 kicks off the 2021 BRAVE Combat Federation calendar on January 19. The event will be held in the beautiful Sochi, 1,600 km south to the capital Moscow. The card will be held in association with the local promotion Krepost Selection.