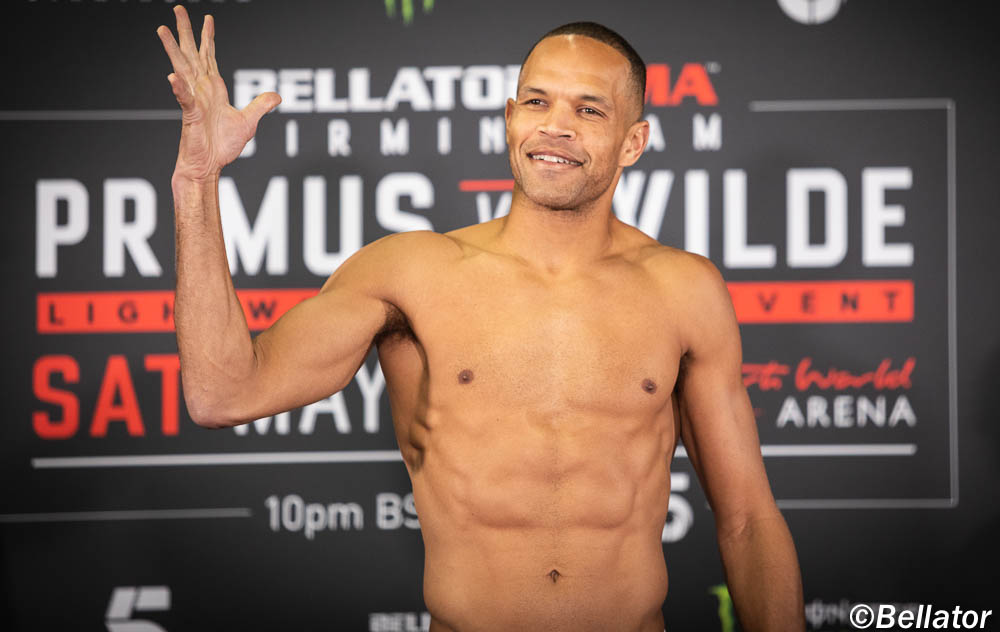 I got a chance to sit down and had a great chat with Bellator welterweight contender and kickboxing titleholder, Raymond Daniels. we spoke about training life in the pandemic, his upcoming fight plans and some of the exciting fights Bellator have coming up.

Raymond: You know it’s been difficult but luckily I have a wife that’s my training partner. so I could train pretty much 24/7. I was able to go over the road and train at the Train lab, I was even able to go up north to Alpha Male

Bobby: Yeah, I did see on your Instagram that you had been training with Uriah Faber at Alpha male, how was it getting to train with those guys?

Raymond: Ah man it was an eye-opening experience. Uriah has a great program up there, a whole plethora of guys we all know and a bunch of guys we don’t know yet. so I was able to go down there and get some good transitions for my wrestling and jiu-jitsu with guys like Chris Holdsworth, Andre Fili, Alex Munhoz, Chris Gonzales and of course Uriah himself.

We then spoke about his most recent bout back in September of 2020, which ended in the second round after an accidental groin strike leading to a no contest, and what his plans were for his next opponent and where it leaves him in the title picture.

Raymond: So actually I am rematching my opponent (Peter Stanonik). I’m excited, you know it’s like a TV show or movie where you don’t get to see the ending. I’m being allowed to turn that TV back on and finish the story.

Bobby: So with your last fight being your 4th in the Cage, of course, you have an extensive background in combat sports before that, do you think that a big win in the rematch could put you that big step closer to the title picture?

Raymond: Of course, it definitely was before the last fight which obviously didn’t end the way I wanted it to, but that’s what I want to do. I am older, I am in my prime, I am 40 I’ll be 41 this year. so I don’t have time to be going down that road of taking on everyone in the division. There is one name in that division I want and that is Douglas Lima. He is an amazing fighter, an amazing champion. I don’t wanna be seen as jumping the line but I feel my experience does get me sort of that ticket to the title.

We spoke after about his highlight reel finish of Wilker Barros back in 2019 and ranked among his many career highlights and recent comments from GSP on Raymond Daniels as a striker.

Bobby: Exactly, there are a lot of fighters who have highlight-reel finishes but very few, if any, have one as extensive as you over such a long period of time. I believe in a recent interview with Ariel Helwani, GSP (George St. Pierre) one of the GOATs of MMA referred to you as the greatest pure striker he had ever seen, which coming from someone of the calibre of him is pretty high praise.

Raymond: Oh man, I had all my buddies texting me like “did you see the show, GSP just gave you the best compliment ever” and I was just like what? what are you talking about? and then I went to see what they were talking about and literally my jaw just dropped. He is someone I know personally, someone I respect as a person and he is just a true martial artist. if you look up martial artist in the dictionary, you will find a picture of George St. Pierre next to it. He is someone I hold in such high regard and for him to respect my craft, I have spent my whole life building makes me extremely happy.

The next question I asked him was one given to me by a close friend who is himself a big Raymond Daniels fan, regarding whether or not he plans to compete in both MMA and Kickboxing simultaneously, as Bellator’s welterweight kickboxing champion, as well as some of the amazing fights Bellator, have line up, including his own Teammate Juan Archuleta, who will be defending his Bantamweight title against Sergio Pettis.

Raymond: My goal is to always transcend in whatever fighting format I am in. Right now I am the kickboxing champion and I will defend that, but I am also trying to get the belt in MMA, right now I am trying to be the best at MMA so I have to make sure I stay focused on that and do what I have to do to be successful.

Bobby: That’s great to hear. Of course in Bellator in general some amazing match-ups are coming our way. We have the final of the featherweight Grand Prix, Romero vs Rumble and your teammate Archuleta will be defending his strap against Sergio Pettis. What are some of the fights coming up that are a “must-see” for you?

Raymond: Ah well Juan Archuleta vs Pettis is a big one, obviously, Juan is my teammate and he is an incredible athlete, I have never seen a workhorse like him. That being said I am possibly gonna be in his corner so I will have a front-row seat to that one. There’s a great one coming this week with Ryan Bader vs Lyoto Machida 2, Bellator’s light heavyweight Grand Prix is looking good. You have Phil Davis fighting for the title as well, I think it’s gonna be a good one, I think he will make the adjustments he needs.

Finally, we spoke about his wife, Colby Northcutt-Daniels, who will be fighting for ONE championship in just a couple of weeks and whether he will be making the journey to Singapore.

Raymond: Yep, after we are done with fight week I will be heading out 4 days later. so I have to sort of come home, unpack, repack and then head off again for Singapore. It’s been really fun going through this camp with my significant other. someone who shares my passion, my drive and the sacrifices you have to make as an athlete so yeah, very very interesting