Here's where to watch if you are in the UK...

by Craig Lee
in UFC
0

The 29th season of The Ultimate Fighter is set to begin in the US tonight (June 1st) so it will not be shown here officially until Wednesday.

The show will air across the pond first at 9 pm ET/6 pm PT which is 2 am here, however, we will have to wait a little bit longer as it will not actually be shown until 2nd June at 9:30 pm. BT Sport 3 (HD) will be the channel you need to watch the show. 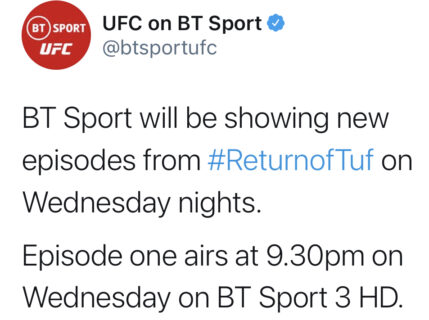 Aussie Volkanovski has already leaked news on the pair’s rearranged title match on the Joe Rogan Podcast, “From what I’m told, and I don’t know if I’m going to get in trouble saying this, I’m not sure. But I think it’s September, early September. I’m guessing (in the United States),” Volkanovski said of the date and location”.

The fight was originally planned for UFC 260 in March but was cancelled due to the champion catching Covid.

What are your expectations for this season and who do you think takes the title home with them in September?

Miocic is desperate for a trilogy with Ngannou: "I know what I did wrong, and it's driving me insane."