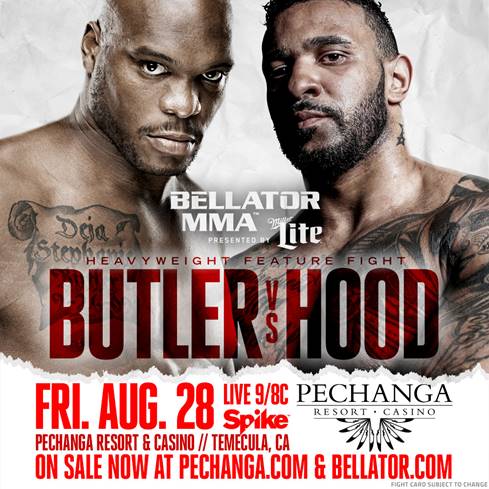 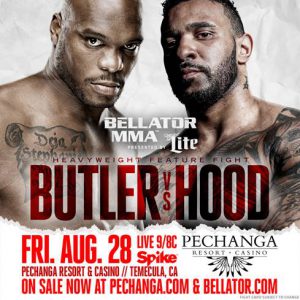 The highly anticipated promotional debut of Lorenzo “The Samoan Silverback” Hood (9-2) will come on the main card of “Bellator MMA: Guillard vs. Girtz” against Raphael “The Silencer” Butler (9-1-1) on Friday, Aug. 28 at Pechanga Resort & Casino in Temecula, Calif.

The contest will serve as the opening main card bout of “Bellator MMA: Guillard vs. Girtz,” which airs live and free on Spike at 9 p.m. ET/8 p.m. CT, with preliminary bouts streaming on Spike.com at 7 p.m. ET. Additional bouts will be announced shortly.

Tickets for the event, which start at just $50, are on sale now at Pechanga.com and the Pechanga Resort & Casino box office. Doors for the event open at 4 p.m. PT local time, and the first contest takes place one hour later.

One of the most sought-after heavyweight prospects in MMA, the 6-foot-3 Hood has been competing professionallysince 2009 and has never allowed a fight to go past the first round. Of his nine career victories, each and every one has come by knockout. Hood has fought throughout the U.S. while competing on the regional circuit, earning himself the distinction of being one of the top heavyweight prospects in the sport.

“The Silencer” started his combat sports career as a professional boxer, where he racked up 28 knockouts in his 35 total victories, and still trains with high caliber strikers including Heavyweight Champion Deontay Wilder. Butler now makes his seventh appearance under the Bellator MMA banner, his first since finishing Josh Diekmann at “Bellator MMA: British Invasion” this past February. Much like Hood, the Minnesota native has never allowed a match-up to reach the judges’ scorecards, accruing six knockouts and three submissions along the way.

With all the hype surrounding the debut of Hood, Butler will look to play the role of spoiler when he enters the Bellator MMA cage for second time in 2015.