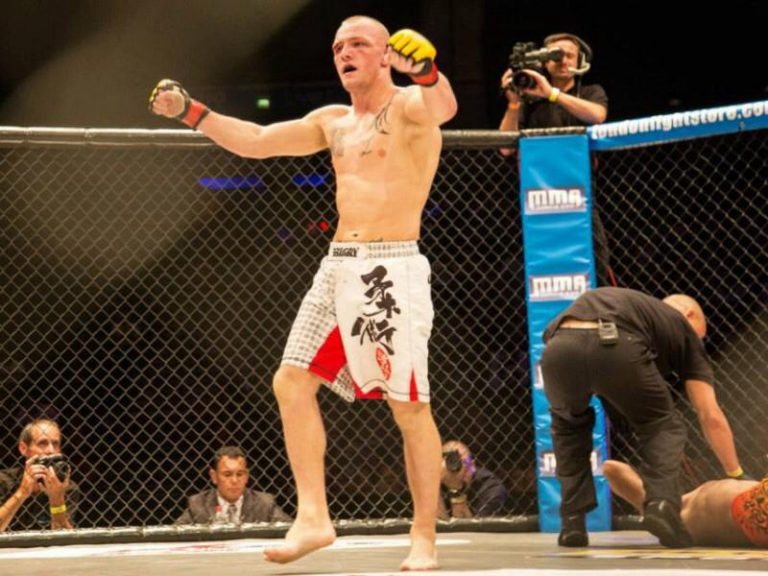 Chris Fishgold: “I hope you keep your hands up and have a good chin, because you’re going to need it”

On Saturday 26th September in Newcastle, MMA fans get a treat when they get to see some of the countries finest talent go head to head on Made 4 the cage 18: Takeover. Late replacement hard hitting Kyle Redfearn takes on Jack Marshman in the main event for the vacant Middleweight title, as Ryan Scope unfortunately was forced to withdraw due to injury. Not to worry as the game Redfearn will certainly not disappoint and it is anticipated to be a war.

The co-main event sees two huge prospects go head to head as Chris Fishgold (10-1) takes on Ryan Roddy (7-1). Both men only have one loss in their career and will be looking to keep it that way, a win for either men would be a great notch on their record. We caught up with Chris and asked him a few questions and here’s what he had to say, but not before he had a message for Roddy.

“Lets go out And gain some fans and give everybody what they’ve came to see, a fight with a lot of aggression, and I hope you keep your hands up and have a good chin cause you’re going to need it”

Q. What do you see in Ryan Roddy as an opponent and what threats does he pose?

A: He’s a keen fighter And has an all round game but I believe his inactivity will play a factor And I believe I’m better in all aspects of the game technically.

Q. How’s training been for this fight in general?

A: I’ve been over in Phuket training at Phuket top team with a number of BJJ blackbelts And fighters in promotions such as one FC, UFC and Bellator… The likes of Thiago Tavares, Nazerano Malgarie, Adrien Pang, Suman from ATT aswell as Manu and American wrestler Derek Hecls and more. Now I’m back for my final weeks at next generation MMA And aspire MMA in my home city of Liverpool. I’ve been training hard and I’ve had my chin And ground game tested. Im well prepared for this battle.

Q. Do you know much about Ryan Roddy?

He likes to change his stance and has a decent all round game. He’s originally from Ireland but lives in Newcastle (I believe), but like I said I’ve trained with higher calibre fighters in both stances so I can adapt my game to what ever he decides. His only loss Is coming by way of submission.

Q. How does the fight end?

If you don’t want to miss out on a phenomenal card then get yourself along, either purchase tickets from fighters or Dale Percival, owner and fantastic matchmaker of Made 4 the cage!