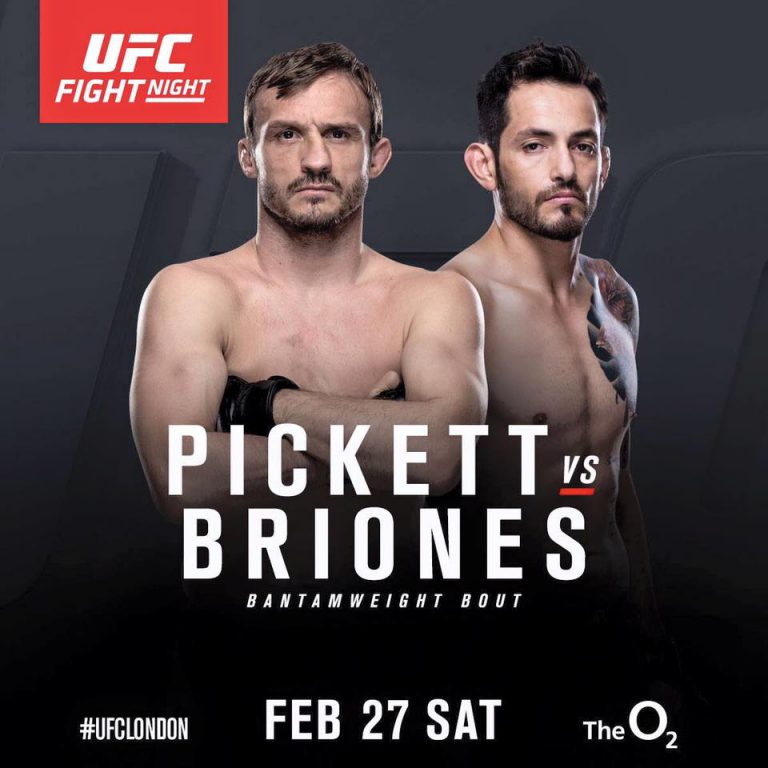 UFC FIGHT NIGHT® LONDON marks UFC’s return to England after almost two years’ absence. Tickets to the event, which is set to take place at London’s O2 Arena on February 27, sold out in just 27 minutes, demonstrating the overwhelming demand from fans across the UK for live UFC action.

Fan favourite and veteran of the sport Brad “One Punch” Pickett (25-11-0, fighting out of London, England) will compete in front of his home crowd, as he takes on Mexican Henry “Bure” Briones (19-5-1, fighting out of San Diego, CA, USA).

East Londoner Pickett was a keen soccer player in his youth and used to box to keep fit. He later made the decision to switch to MMA in order to experiment with a variety of disciplines, and soon found a natural talent for the martial arts. Pickett has been competing in the UFC since 2011 and, in that time, has picked up no less than five Fight of the Night bonuses.

In March 2014 Pickett secured an unforgettable win over Irishman Neil Seery in front of home fans at the O2 Arena. The Englishman will undoubtedly be looking to replicate that success come February 2016.

Briones, meanwhile, is a veteran of the UFC’s reality TV show The Ultimate Fighter® and joins an impressive crop of talent emerging from Latin America, looking to make their mark. “Bure” was a dedicated hockey player before he made the decision to step into an MMA gym in his hometown of Tijuana, Mexico in 2006.

Britain’s Davey “Dangerous” Grant (8-2-0, fighting out of Bishop Auckland, County Durham, England) will also step out in front of home fans on February 27, as he goes toe-to-toe with Ecuador’s Marlon “Chito” Vera (7-2-1, fighting out of Chone, Ecuador), who is also looking to make a name for himself in the bantamweight division.

Grant first began training in MMA as a way to build up his fitness but, after progressing through his teenage years, he made a bid for a career in the sport.

In 2013, Grant was a standout on The Ultimate Fighter®, where he competed under the direction of coach and former women’s bantamweight champion “Rowdy” Ronda Rousey. Grant was due to fight at UFC FIGHT NIGHT® LONDON in 2013 but was forced to withdraw just days before the fight after sustaining an injury. Fans have been clamoring for the Englishman to return to the Octagon ever since.

Grant faces a young contender in Vera who, at the age of 23, has two UFC bouts under his belt including a win against Roman Salazar, which earned him a Performance of the Night bonus. “Chito” grew up in Ecuador and began training in MMA at 16, with one goal – to fight in the UFC.