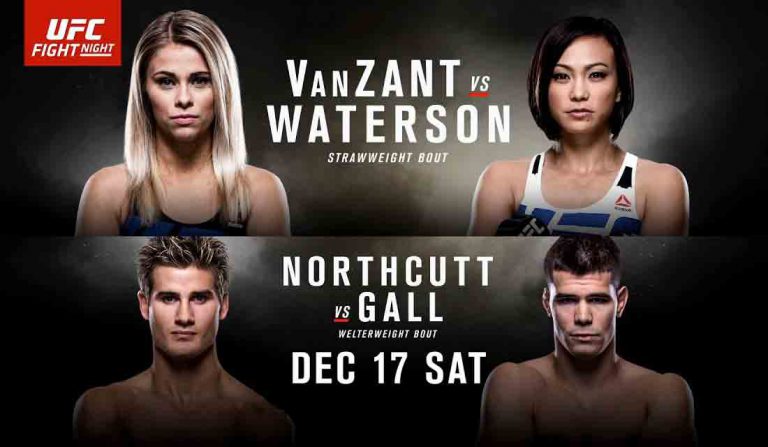 UFC Fight Night takes place tonight in the Golden 1 Center in Sacramento California, with the headline bout between “12 Gauge” Paige VanZant coming off a sensational flying switch kick KO of “Rowdy” Bec Rawlings against “The Karate Hottie” Michelle Waterson who hasn’t fought since  her promotional debut against Angela Magana on July 12, 2015 at The Ultimate Fighter finale . She won the fight via submission in the third round. The Card also features the likes of “Super” Sage Northcutt, Mickey Gall and the retirement fight of Urijah Faber and we have the results live as they happen.

Result: Eddie Wineland ties Faber & Barao for most finishes in UFC/WEC BW history with 7 after he defeats  Mizugaki via TKO at 3:04 of round number 1

Result: Massive amount of strikes thrown by both girls in a great fight which sees Leslie Smith prevail via Unanimous decision (29-28 ,29-28,30-27)

Result: It had it all from spinning back kicks to spinning back fists and James Moontasri survived a late flurry to avoid been finished but it wasn’t enough as Alex Morono takes it by unanimous decision (29-28,29-28,29-28)

Result: Mizuto Hirota doing some good work on top towards the end of the first, Cole Miller doing nothing with the 6 and a half inch reach advantage , second went pretty much the same with Hirota solidifying top position for the majority of the second ,and finally a dominant third by Mizuto Hirota , Cole Miller never got out of first gear , the judges scored this (30-26, 30-27,30-27) in favour of Tokyo Japans Mizuto Hiroto.

Result: Paul Craig makes it 8 submission victorys from his nine wins with a contender for performance of the night , Great stand up and finished off with a slick armbar , fantastic performance on his promotional debut. Round 2 Submission win for Bearjew.

Result: Flawless performance once again by Alan Jouban , his leg kicks were key in that fight a he also dropped Perry in the second , all in all a great display by Jouban who gets the W by unanimous decision , judges scored this (29-28,30-27,30-27)

Result: The blackout treatment for Urijah Faber and you would expect nothing less, great first round for Urijah dropping Brad and also nearly sinking in the RNC . Relentless pressure from the California Kid in the second with a nice sweep and making the most of top position and looking for a guillotine on a couple of occasions. Another fantastic sweep from Faber to start the third , Pickett doing a great job defending the front headlock. Brad drops Urijah with a straight left but it was just a case of Urijah losing his balance . It has gone the distance and the judges score this in favour of “The California Kid” Urijah Faber. Unanimous decision (30-26,30-26,30-26)

Result: First round went well for Gall scoring two takedowns and trying for a guillotine which Sage  done well to get out off . Gall gets dropped early in the second , Sage finding a home for that left hook , and then Gall drops Sage with a right and Gall immediately goes to the rear naked choke and submits Sage Northcutt in the second. Great ground work by Gall . He now moves to 4-0.

Result: Spectacular head and arm throw by Michelle Waterson and she sinks in a RNC and finishes Paige inside the first round . Perfect performance.