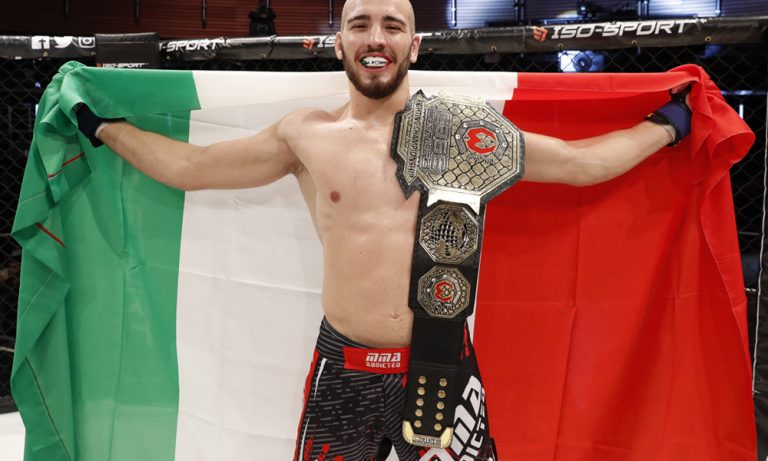 Last weekend saw a new Cage Warriors Welterweight Champion crowned as dangerous finishers Stefano Paterno and Mehrdad Janzemini squared off at the Indigo at the O2 for the vacant belt in the main event of Cage Warriors 95. On the night, it was Italian Paterno who lived up to his reputation as a heavy hitter as he got the first round KO win in Janzemini’s hometown.

Following the win, I wanted to take a closer look into Paterno’s career to date and what the future holds for the dangerous Italian.

Paterno, just 22 years of age, is a product of Milan’s MMA scene, making his professional debut in 2012 at the age of just 16. He is the latest in a growing list of MMA talent coming out of the country including UFC’s Alessio Di Chirico and Marvin Vettori, Bellator’s Alessio Sakara and Cage Warriors own Luca Iovine to name but a few. With a current record of 12-2-1, the future is looking very bright for the Italian hotshot.

Paterno won his debut fight as a 16-year-old, defeating Catalin Crisan via first round submission. He would go on to pick up three more wins, all via stoppage, on the Italian regional scene before he tasted defeat for the first time.

In November 2013, still just 18 years old, Paterno suffered defeat to Rafaelle Spallitta via unanimous decision. However, he would run it back with Spallitta in his very next fight in May 2014, making amends for his first loss by picking up a second-round TKO to get himself back in the win column. Paterno would then go on to suffer his only other professional defeat as he dropped a decision to Andrea Fusi at Ring Rules 2015 in the November of that year.

Again, as with Spallitta, Paterno would run it back with Fusi in his first showing for Venator FC where he would avenge his loss, on this occasion picking up a third round rear naked choke win.

Paterno would go on to pick up stoppage wins in his next four outings, three of which came under the Venator banner with the other being for Venkon. During that win streak, he defeated former UFC competitor and TUF contestant Cody McKenzie, picking up the win via ground and pound with just one second remaining in the first round.

Paterno’s next outing saw the only other occasions where he has not picked up a win as his fight with another top Italian talent Giorgio Pietrini ended in a majority draw.

Italian Fighting Championship 3 played host to Paterno’s next outing, as he got back in the win column by defeating UK MMA veteran John Maguire via first-round knockout. As Maguire pressed for a takedown against the cage, Paterno rained down elbows that sent Maguire sprawling to the canvass, a little ground and pound later and Maguire was out.

The impressive win over Maguire earned Paterno the call up to Cage Warriors where he would get an immediate shot at the vacant 170lbs title against Janzemini. London’s Janzemini would threaten with his signature heel hook early in the round, however, Paterno scrambled free and wound up on top in full mount. He patiently worked his ground and pound before eventually catching Janzemini with a big shot on the jaw that stunned him, a couple of heavy strikes later and the fight was over and Paterno was being crowned the NEW Cage Warriors Welterweight Champion.

So what next for Paterno?

If history is anything to go by then Paterno could and should expect a call-up to the UFC in the near future. Cage Warriors are known for producing top talent and providing the platform for top Europeans to make their way to the premier mixed martial arts promotion, and I wouldn’t expect any different with Paterno.

He may have to get a title defence under his belt beforehand, and with a number of good fighters coming through in the weight class at Cage Warriors, challengers shouldn’t be hard to come by. Scotland’s Ross Houston called for a shot at the title following his win over Nathan Jones, also at Cage Warriors 95 over the weekend, and at 7-0 I wouldn’t be surprised if we saw him take on Paterno in the near future.

If Paterno manages to successfully defend his belt I would expect the call from the UFC and it wouldn’t surprise me to see a UFC event in Italy over the next year or two.

One thing is for sure and that is the fact that Stefano Paterno is an extremely good talent and definitely one to keep an eye on in the future!