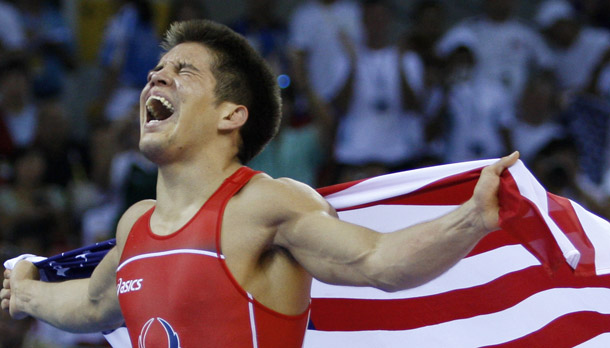 The UFC has often signed elite athletes to its roster with many having been able to say they have had Olympic success. Medalists such as Ronda Rousey, Sara McMann, Yoel Romero, and Matt Lindland have wowed fans since they made the transition to MMA. But they never won Gold. Only an elite few have competed in the UFC and won Olympic Gold (Kevin Jackson and Mark Schultz). The UFC are proud to announce another Gold medalist.

27-year old Henry Cejudo, the 2008 United States Olympic Gold medal winner in freestyle wrestling, has been signed a contract with the UFC. The fighter to welcome him into the Octagon? Non other than veteran flyweight Scott Jorgensen. The two will meet on August 30 in Sacramento at UFC 177.

In an interview with UFC.com, Cejudo had this to say:

“It feels good to be part of the UFC family finally”

“In wrestling, you’re talking about a fraternity of champions, and I got a chance to be a part of that Olympic championship club,” he said. “And anyone that ever won the Olympics in wrestling, there’s something different about them. And that’s something that I’ve always wanted to carry over to mixed martial arts when it comes to discipline, when it comes to technique, and when it comes to becoming an overall fighter. Everything that I did to win a Gold medal, I’m practically transferring it over to mixed martial arts.”

Cejudo transitioned to mixed martial arts after losing in the 2012 Olympic Trials where he removed his shoes on the mat and threw them out into the crowd signifying his retirement and getting a standing ovation from the crowd. He made his pro debut in March of 2013 with an 85-second finish of Michael Poe. He kept up his winning ways and enters the UFC with a 6-0 record with four of those wins coming via knockouts.

“I always wanted to become a student of the game and at least get six to eight fights before coming to the UFC,” he said. “Now I think I’m in my prime, and I’ve never felt this strong in my life. I won the Olympics at 21. I could only grow half a moustache (laughs), and now I’ve got a full beard.”

“He (Jorgensen) is a tough fighter and I know it’s going to be a fight,” said Cejudo. “He’s a wrestler, he wrestled Division I, and it’s not going to be an easy fight, that’s for sure. But I’m ready. You could say I was born ready, and if that’s who they want me to fight, that’s who I’ll fight. My goal is to become a world champion.”

Will he add MMA gold to his Olympic haul? Only time will tell but his journey begins on August 30th at UFC 177.