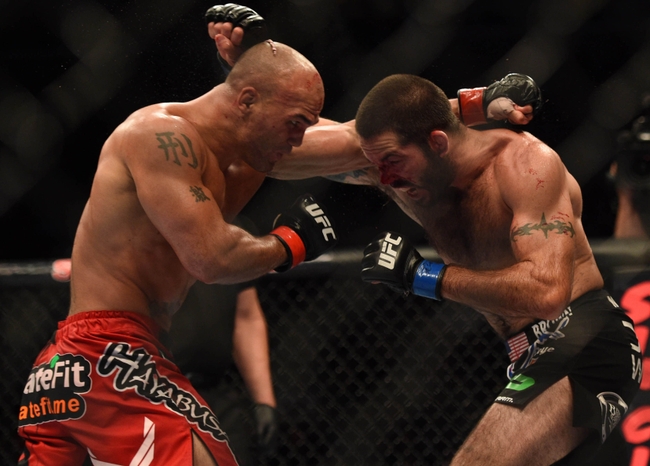 Fans love it when a fighter gives it all his has to give in the octagon, even if it’s not enough to get the victory. Matt Brown left it all in against Robbie Lawler at UFC: Lawler Vs. Brown on Saturday. So much so that he was still throwing punches with his right hand even after it seemed apparent he has injured it at some point during the fight.

During the post-fight press conference UFC President Dana White announced that “The Immortal” had immediately left the arena following the end of the fight and was on route to hospital to receive medical attention. Brown appeared to have suffered an injury to his right hand during his five-round battle with Lawler, showing an obvious restraint to throw punches with it unless he really needed to.

Both men showed the scars of a fight after the final bell ended up ultimately Lawler got the nod from the judges via unanimous decision with the judges scoring it 49-46, 49-46 and 48-47 in Robbies favour, breaking a 7 fight winning streak for Brown in the process. Matt may have lost the fight but he proved to many doubters that he could hang in the top 5. Now he begins his road back to contendership and after healing up, will hope to start another impressive run in the division.

Lawler will go on to challenge Welterweight champion Johny Hendricks for the title for the second time. The first time was a close fight to crown a new champion after Georges St-Pierre vacated the belt and took a hiatus from the sport.

Rumble One Fight Away From Title Contender Status