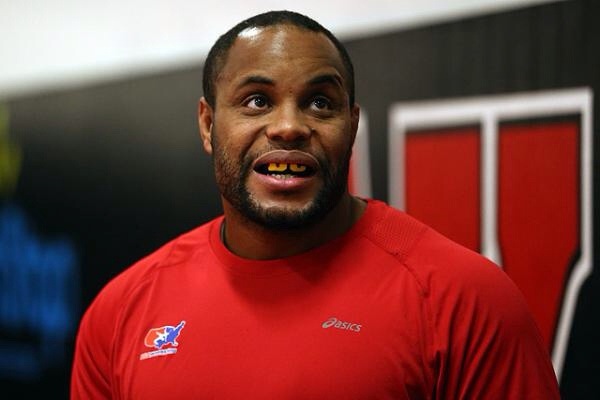 Daniel Cormier finally gets
his chance the title shot he’s been waiting for when he takes on UFC Light Heavyweight champion Jon Jones at UFC 178 on Sept. 27, 2014 in Las Vegas, Nevada.

Jon’s original opponent, Alexander Gustafsson, suffered a knee injury in training, and subsequently remove himself from the title fight rematch with Jones. Funnily enough Cormier himself was set to undergo surgery to take care of his own knee issues, but opted out of the procedure to see if it felt better on its own and was luckily able to step in and test himself against the champion.

When asked if he was worried about his knee heading into the title fight, Cormier said he wasn’t, in fact will be disappointed if ‘Bones’ doesn’t target the injury.

The two have had a rivalry brewing ever since DC chose to drop down to the Light Heavyweight division with Cormier openly calling out Jones while Jon opted to take to social media for his taunts, a move that always draws criticism from MMA fans as the social-media version of Jones seems to different from the TV version giving him somewhat of a two-faced reputation. But DC encourages Jones to keep doing what he’s doing

“I think it’s good. You know, I said time and again that I didn’t believe he should try and protect an image that doesn’t even exist anymore. That image he put out when he started fighting before, that’s gone. People saw through that. People know that he is not this person he put off he was at the beginning of his career because of the things he’s had to deal with just in the media. He had to grow up a lot faster than most people did in this sport because he’s so good. So, I like his heel persona. It just tells me that he’s a bit uncomfortable because this is out of character for Jon Jones. He doesn’t directly go at his opponents as he has with me. He’s out of character a bit. I’m not in his mind or under his skin, but I know that he knows that he’s got a real fight ahead of him on September 27. So maybe he’s trying to use mind tricks on me to affect me, but that it is so petty and childish. You can not use mind games on me. I’ve dealt with this stuff for so long in my life, that mind tricks wont ever work.” Explained Daniel

One of the biggest factors in their fight, and every fight Jones is involved in, is Jon’s superior reach advantage. in this case his heightalso comes in to play. So what will DC do to level the playing field? He’s not giving away any secrets but Daniel is as confident as ever as he looks forward to his title showdown.

“You just got to watch and see. I believe in myself 110 percent. There is a badder man out there for everyone of us. As good as Jon Jones is, there is somebody that can beat Jon Jones. I believe I am that guy. And there is somebody out there that can beat me. I don’t know who that is, it could be Rashad Evans, it could be Glover Teixeira, it could be one of those guys that are just better than I am. But I believe that on Sept. 27, reach and height, none of that is going to matter because I believe I have the ability to beat Jon and i have the ability to compete with Jon and the confidence in knowing that I can get the job done. This is the first time you have two undefeated guys fighting for the championship. This is a big deal, man, This is the type of fight we need in MMA to show that guys can sustain being undefeated for a long time, get to the top of the sport and fight each other for the ultimate prize. This is a big deal. I can feel it, I know Jon can feel it and I can’t wait for it.”

DC mentions that Jones is undefeated, an opinion shared by many fans although it’s not technically true due to a disqualification he suffered in 2009 after trying to end a fight with Matt Hamill using illegal elbows.