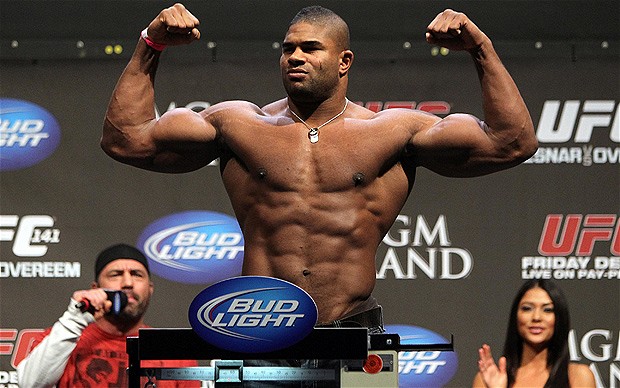 In an interview with Sportkeeda, former Strikeforce heavyweight champion Alistair Overeem stated his hopes for a future rematch with Brock Lesnar, a man he destroyed previously  at UFC 141.

So why does Overeem want a rematch with a fighter he clearer beat and has since retried from the sport? Well, he believes Lesnar will be coming back.

Since that decisive win Alistairs career has been inconsistent with losses against 2 men in fight he had, at times, been dominating, Antonio Silva and Travis Browne. And Overeem contributes those losses to his former training partners.

From his conversation with Sportskeeda:

“I do think that my losses were contributed to by my team at that time, because you need to have good sparring partners, good coaches that take care of the direction of the fight, the overall training regimen. I do think that was lacking in the two losses. But then again, it is sports and as you saw with Spain, who were world champions twice and we (Netherlands) destroyed them completely and couldn’t even get through to the finals. But that’s what happens, you are on a winning streak and then people change, teams change, people get better, new opponents arise and I did drop the ball a few times because you are condemned to do that. But everyone can be assured that I am always working hard, always training hard, put together the right team behind me and I do feel that a new title reign is coming soon for me… I do believe that Brock Lesnar will be coming back, I don’t want to call it from retirement, but he is a huge draw, big guy, sells tickets. So that’s a fight I would be interested in.”

His dream seems incredibly unlikely as Brock Lesnar has since gone back to his former employers in the WWE and though rumours always circulate about his return, there seems to be little credibility in them.

I’m not quite sure why Overeem is so focused on Lesnar. Even if Brock does return, the sport has evolved a lot since then and their will be many up and coming fighters also wanted to make a name, and a pay check, for themselves by taking on Lesnar. Not to mention Overeem was originally thought to be a title contender when he signed to the UFC. A reputation that has since fallen far from title contendership. He should surly be focused on getting back in the mix, not on past glories and blaming ex-team mates for his own failures.

Overeem will next enter to octagon against Ben Rothwell at the upcoming UFC Fight Night 50 at Foxwoods Resort & Casino in Ledyard, Conn., on September 5, 2014.