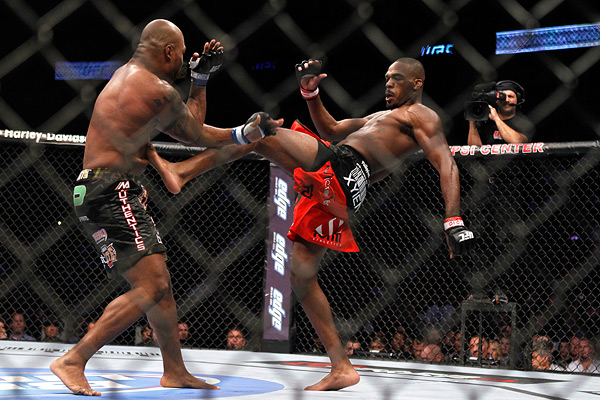 It looks like the UFC have been listening to Joe Rogans commentary and have decided to act. Rogan has been very vocal in the past about how the standard reach statistics don’t include the leg reach and are therefore misleading. According to an article from MMA Junkie, it seems all that is about to change.

“I think it’s a real positive for the sport. It could be a really interesting measurable, and I think it’s long overdue. We know what arm reach is, we know what a sizable discrepancy is in arm reach. Jon Jones with his 84.5 versus, say, Dan Henderson with 76. That’s a huge difference. But what’s a huge difference in leg reach? I have no idea. It’s going to take a little while on the analytical side of things to figure out what’s a good length in proportion to what weight class you’re in and what’s a sizable discrepancy. A sizable discrepancy in leg reach might be much smaller than arm reach.”

Leg reach will be measured from the hipbone to the heel. Even though measurements for every fighter still need to be gathered, one noticeable aspect is the fact there’s a much narrower gap in leg reach between two opponents as opposed to the arms. UFC commentator, Jon Anik has seems early measurements and backs up the narrower gap claim:

“You’re not going to find as much discrepancy in these numbers as you see in some of the traditional reaches. When I looked at them for the first time today, the number that jumped off the page is Jack May at 6-foot-8, and his opponent Shawn Jordan is 5-foot-11, and their leg reach is only two-and-a-half inches different. I don’t think you’re going to see as big of discrepancies when it comes to the leg reach. It’s an important statistic, because we know how often knees and kicks are employed in mixed martial arts.”

It will be interesting to see what impact, if any, this new info will have on strategy and game plans but it is definitely a positive step for MMA in general as there are so many more weapons in a fighters arsenal than his or her arm reach.

Randy Vs. Fedor At Metamoris? 'The Natural' Likes The Idea.