Phil Baroni Fired From Bellator For Support Of War Machine

by MMA UK
in Bellator
33 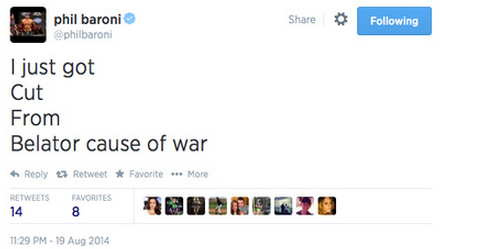 It seems new Bellator CEO Scott Coker is not messing around and has instantly fired Baroni for his support.

The release has not been officially announced but Baroni has tweeted of his release as shown above. Of course he may have been on a one way training to sackedville anyway after dropping his past three fights in a row and being destroyed by Karo Parisyan in his promotional debut at Bellator 122.

Video: The MMA Community Take On The ALS Ice Bucket Challenge - Part One