Dana White Open To The Return Of Brock Lesnar 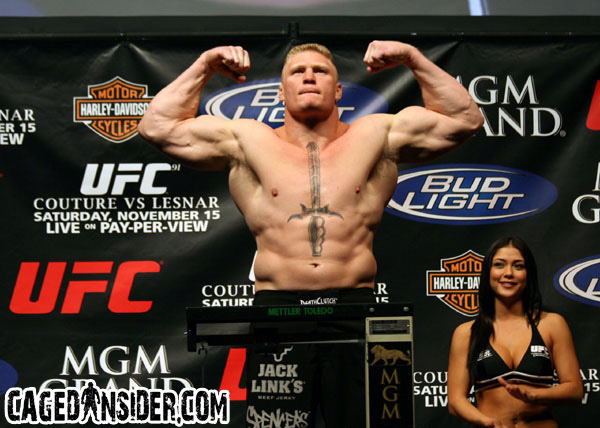 Dana White has opened the doors for one of the baddest men on the planet Brock Lesnar to return to the UFC.

At the start of the month former WWE play-by-play announcer Jim Ross told Fox sports that he thought Lesnar could be a force in the UFC in 2015. “It looks to me like he’s gotten back on track,” said Ross. “He looks phenomenal strength-wise. He’s just scary looking. He’s more scary looking than he was before he left [WWE the first time]. … I see no reason he couldn’t have the potential to return to the UFC and sell pay-per-views.” He also announced that his WWE contract runs out after Wrestlemania 31 in March.

This will open the doors for a potential return to the UFC in 2015. There is also a chance that Lesnar will re-sign with the WWE.

White says he is in regular communication with Lesnar, and that the former heavyweight champion has not broached the idea with him.

“I have a great relationship with Brock, we talk all the time,” White said. “I don’t know, we’ll see. If he wants to fight, he knows my number.”

“It’s pretty amazing what he did and accomplished here while having diverticulitis. It would be interesting to see a 100 percent healthy Brock Lesnar compete.”

There is no shortage of potential bouts waiting for him should he decide to come back to the UFC. Former heavyweight champs Frank Mir and Shane Carwin have already publically expressed interest in welcoming Lesnar back to the UFC.