COREY ANDERSON GETS A NEW CHALLENGER FOR UFC 181 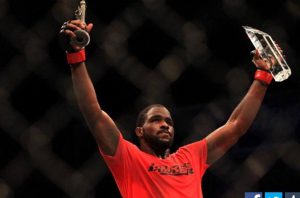 UFC officials announced that we have yet another new opponent for Ultimate fighter winner Corey Anderson at UFC 181. Justin Jones (3-0 MMA) will now step in and make his UFC debut and will replace the Jonathan Wilson on two weeks notice. UFC 181 is set to take place on December 6th at Mandalay Bay Events Center in Las Vegas. UFC 181 will feature two title fights Champion Johny Hendricks  will put his belt on the line against Robbie Lawler for  the Welterweight title and Champ Anthony Pettis  will battle Gilbert Melendez  for  the Lightweight title.

The 27 year old California native Corey Anderson (4-0) won The Ultimate Fighter 19 when he faced Matt Van Buren and wasted no time getting a first round knockout. Justin Jones (3-0) UFC newcomer  has three wins under his belt since  he became pro in January finishing all three of his opponents.