by Michelle Luce
in UFC
15 There can be no doubt that McGregor (16-2) is riding the wave of a lifetime right now as he heads into battle this weekend. With a shot at current champ Jose Aldo dangling just beyond Siver, a win Saturday night could set up one of the most talked about matches for quite some time when it comes to Aldo. With style, power, confidence, and momentum, a great or even decent showing from McGregor will all but set fire to the rest of 2015.

Did I mention the guy is on a 12-fight win streak?

Standing in the way of the hype train is season UFC veteran Dennis Siver (22-9-1). A “Fight of the Night” machine himself, Siver has made it known he is not afraid of Conor, and plans to put and end to his rise. With a strong chin and an unique style of his own, do not count Dennis out on Saturday night when the cage door closes.

Not a lot of people realize that this is the third time these guys have faced each other. Henderson (21-4) won the first two, however neither man is the same as they were in either fight. Cerrone (26-6-1) has seemed to grow and make a resurgence, while Benson does an amazing job, but has hit a bit of a plateau.

With talks of moving to Welterweight from Bendo, we may see a fighter who is not 100% on Saturday. Of course, both guys are elite and professional as they come, so I am sure that the fight will be all in the cage style from bell to bell. Being that Donald has fought and lost to Benson twice, and yet took the fight on short notice, makes me feel like he knows something the rest of us don’t.

That or he just loves fighting that much.

You have to give credit to Stallings, man. The guy is as hardcore as they come to take this fight on less than a week’s notice. Hall, although not fully living up to the hype, is still an insanely talented fighter with a ton of future potential in the sport. With two past opponents falling to the sideline’s for Saturdays bout, it will be interesting to see what adjustments he makes between now and then. Of course, many will be rooting for Stallings, who will be a huge underdog when this fight cranks up.

Tibaus (30-10) middle name is Herulano, I could not make this up. The man is a beast, and one fighter that has become a major UFC “Gatekeeper. With almost a decade of fighting inside the UFC and 0 title shots, Tibau has fallen to that admirable zone of elite fighters who constantly challenge and test the newbreed/upcoming talents. Win or lose, he can match up anywhere in a fight, and seldom disappoints when it comes to the action.

Norman Parke (20-2-1), the Lightweight winner of TUF: The Smashes, has done an amazing job in transitioning from the show to the Octagon. With no losses since fighting under Zuffa, Parke seems on a meteoric (yet subtle) rise to a possible title elimiinator fight in 2015. Not always the most thrilling warrior, nobody can deny his tenacity and heart when it comes to the grind and chasing the W under fight night lights. 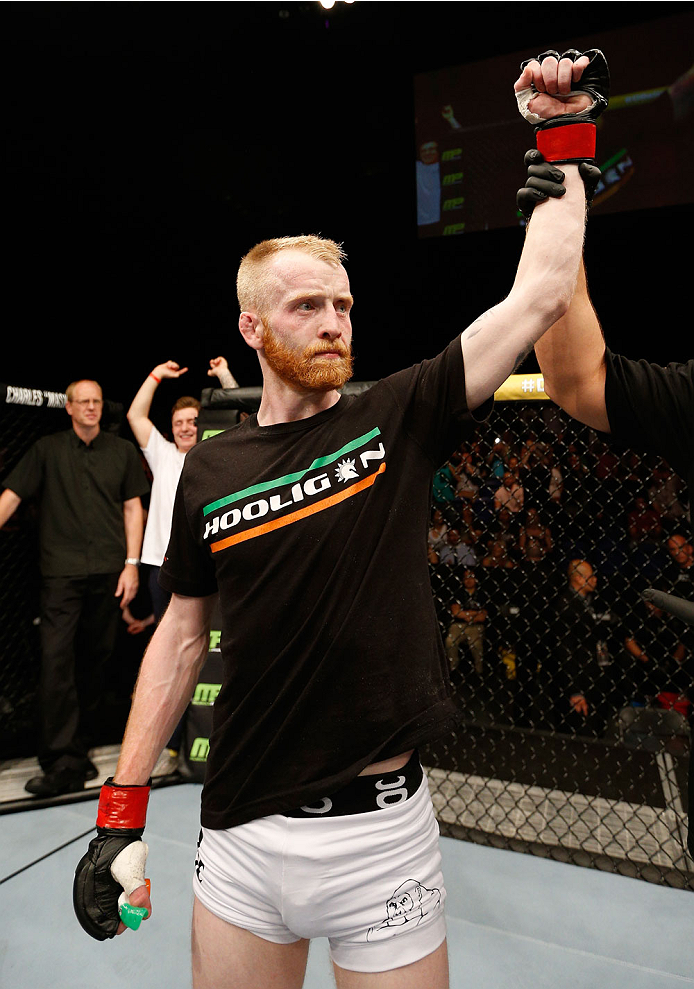 TUF 18 vet Patrick Holohan (10-1-1) returns to the cage since taking his first loss of his pro career at the last UFC Fight Night. A flyweight prospect on the radar, Holohan is determined to get back on track this Saturday with a big win. A submission specialist with 8 of 10 wins coming from the tap, Pat Holohan is far from finished.

Standing in his way this weekend will be Shane Howell (13-8-0), who himself is returning for his second fight inside The Octagon. Also coming into this fight off a loss, Howell has stated his is more than prepared to kick off 2015 with a bang on his way to UFC gold. With the majority of Howell’s losses coming from submission, this fight will no doubt be one of the most interesting prelim fights.

John Howard (22-10) was once one of the most exciting prospects in the UFC. With his divisional home found, but two losses in the books, Howard enters this fight on what could possibly be a last leg. I do not believe the UFC would cut Howard, but another loss will send him very far down the ladder.

Larkin (14-4) is about at the same place. Going 1-4-0 in his last five, there can be no doubt that a win is about an absolute must for the charismatic fighter. A power puncher who often battles to the cards, this weekend is a make or break for Larkin. With Howard and Larkin both known for being tough as hell and absolutely guys who give it everything, this may just prove to be the most underrated bout of the evening.

Especially with so much on the line.

With one of the best names in the sport, Cathal Pendred (don’t you want to say Pendragon?) has flown more or less under the radar. With two wins under his belt since joining the promotion in 2014 (15-2-1 overall), Pendred has already began the mountainous task of climbing the ranks at 170. With power in his strikes and a solid gas tank, Pendred has so far shown tons of talent for 2015.

His opponent Sean Spencer (12-3) is no stranger to battles in the Octagon. A warrior of the grind enters this match with more experience, but also faces one of the toughest challenges of his successful UFC career. With his recent win over the renown Paulo Thiago, Spencer may be ne big fight away from breaking onto the mainstream scene.

Other fights coming to us Saturday night at McGregor Vs Siver include: