Ronda Is The Female Tyson 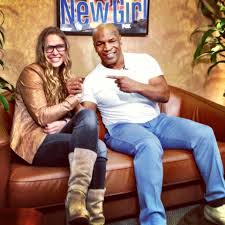 Ronda Rousey is now one of the most dominant champions in not just MMA but combat sports as a whole. We havent seen anyone like this since the heyday of Mike Tyson and at the UFC 184 press conference Dane White made the same comparisons.

“There’s no doubt about it,” said White

“She is without a doubt that female version of him. And I told her. It got to the point with the Tyson thing – well, tonight; let’s talk about tonight. You guys have been around the fight game for a long time. There’s very few situations where a fight goes 14 seconds and the crowd is cheering and going crazy and looking at each other with their mouths open.

“Everybody was looking at each other with their mouths open because she was fighting Cat Zingano.”

“Yeah, we’re going to move her to the men’s division, and see if the odds … I don’t know what to do with this lady.”

What is next for rousey?

Rousey mentioned the names of Holly Holm and Bethe Correia, and there is always the chance of Invicta FC featherweight champion Cris “Cyborg” Santos, but at the moment, the results have shown that to beat Rousey, a fighter will have to be something special.