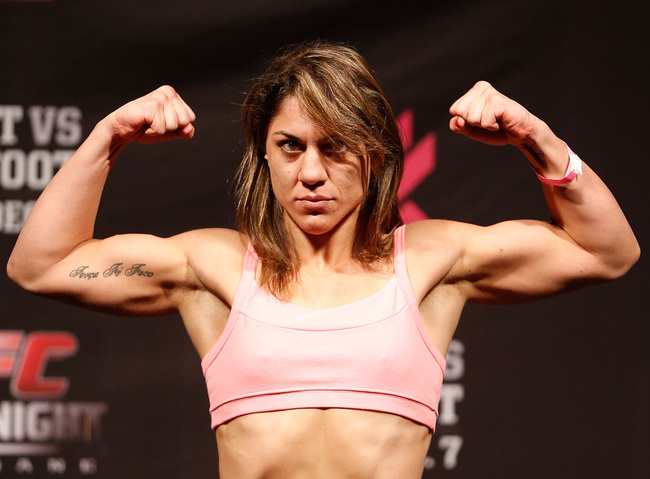 Speaking to Ariel Helwani during The MMA Hour, Ronda Rousey’s mentor, “Judo” Gene LeBell said the UFC Womens bantamweight champion isn’t happy with the ease in which she beat Bethe Correia at UFC 190.

“She wanted to beat this gal up, and she said, ‘I wasn’t through, I wanted to break something, an arm or a leg or neck’,” LeBell said. “But John McCarthy broke it up because she was unconscious. But she said, ‘well, I proved a point.’ She’s happy, so I’m happy.”

Not one to keep quite, the fiery Brazilian Correia fired back on her Instagram.

“I was extremely criticized and judged by lack of respect due to a bad interpretation of the current champ,” Correia wrote. “All that time I saw the real face of the current champ trying to pose as a saint while she always said publicly that she wanted to make me ‘have a meeting with Jesus’ which was her true intention. The media never gave that much coverage. I’d never fight anyone with the intention to kill, break their neck which is something there’s no return from. I wouldn’t joke about it, because wanting to kill someone is not caring about the pain their family would feel!”

The Brazilian fighter, who saw her undefeated record come to an end, seeks a rematch with the UFC bantamweight champion.

“So I tell (Rousey) I’m here and I’ll fight for a rematch in 2016, stronger, more mature, we’ll see each other again,” she wrote. “I wanted to fight you and I got it. I’ll get that chance again and I’ll have my revenge at the right time!”

Whether or not she’ll get another shot only time will tell. She’ll certainly need to win impressively before hand after losing so easily to Ronda. But Rousey is expected to put her title on the line against long-time rival Miesha Tate next, making it a trilogy of fights of which Ronda currently leads 2-0 with Tate having the respectable status of being the 1 fighter who has taken Ronda to a second round.